Modern America has a sweet tooth for sports.  Professional sports is big business and American culture is infatuated with it. In many respects, we live in a “win-at-all-costs” culture.  Our sports-entertainment industry gives platforms to inflated egos, big money, big fame and big people.  Stadiums are cathedrals and those who enter bow at the altar of winning.

WE HAVE AN AWE PROBLEM

While the glittering lights and deafening roars grab our attention, it leads to an “Awe Problem” for the rest of us.

Awe … as in “awesome” and how we define and use that word.

The highlight shows on TV reveal what we Americans think is awesome.
The walk-off home run to win the game … Awesome!
Slam dunk over an opponent …. Awesome!
The hail-Mary, the hat trick the triple-double are all awesome!
That perfect race, that perfect dive that come from behind underdog win? AWESOME!

Now, for the record, none of these things are inherently wrong, and some actually are pretty awesome to witness or pull off.  They rightfully deserve our attention and applause for their inherent beauty and drama. And, let’s be honest, at the professional level and even, to some degree, at the NCAA level, an argument can be made that winning and entertainment are important.  At those levels, winning drives up ticket sales and TV packages, and all of that is good for the bottom line.

And, the bottom line is what drives much of the sporting-entertainment world in which we live.

But when we borrow the “awe-factor”,  the “win at all costs” mentality of that realm of sport and apply it to high school athletics, we are setting ourselves up for a host of consequences, many of them not too pleasant.

WHEN WINNING IS ‘EVERYTHING’ 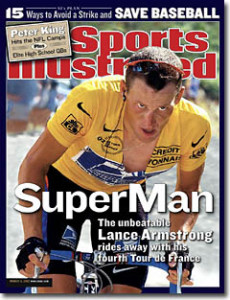 When winning becomes the bottom line at King High, then arguments over playing time and starting lineups ensue.  When we have to win, we yell at umps, at coaches and even our players.  When winning is primary, dirty play and cheating can occur.  When we are defined by the final score, we are prone to talk smack and our twitter feeds are littered with 140 character sound bites that bite.

But it doesn’t have to be this way.  There’s an entirely different way of looking at high school athletics and we here at King call it PEAK!

PEAK is an acronym that stands for PROMOTING EDUCATIONAL ATHLETICS AT KING.  It’s the antibody to the poisonous ideas of “2nd Place is the First Loser”, and “Winning is All That Counts”.  It was born from decades of collective coaching experience and inspired in no small way by legendary UCLA coach John Wooden and his Pyramid of Success philosophy.

But not only that, it’s about recommissioning the way we use the word awesome as it relates to kids and sports.

The “E” in PEAK of course stands for education, and one thinks of grades and GPA’s.  It goes without saying that the term “student-athlete” is embodied in that.  PEAK proclaims that grades and maintaining strong GPA’s are in order, and that they are ordered as a priority.  We want our students excelling as much in the classroom as they do on the field or court.  Excellence governs PEAK as well.  The pursuit of excellence in life is a very noble goal, and “excellence” is like re-bar running through the foundation of King High’s philosophy.  Winning is often a byproduct of the dogged drive toward being excellent.

But PEAK is more than this; it is no less than the following eight characteristics.

PEAK is about goodness, demonstrated in being a good sport in the both win and the loss.  It’s about doing good for your teammates, your team, your school and your community and doing good work, even when you may not be in the spotlight, or especially when no one is looking.

Third, PEAK is about joy.  Joy that is expressed and felt after a well earned victory, but also the deep inner satisfaction athletes get when they come to realize the treasure chest of great things they gained along the way — the lessons learned, the experiences and opportunities they got to learn from and enjoy. 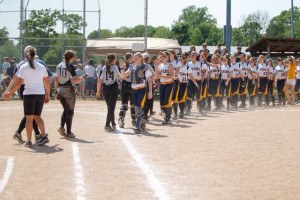 PEAK is also about peace; that peace we coaches should be teaching our athletes that a bad game is not a death sentence.  It’s a peace we hope our kids rest in when they’ve realized they’ve done their best and the score isn’t the final chapter in their story.

Fifth, PEAK is about faithfulness.  We want student-athletes to be faithful to not just their athletic ability but to King High, to our community, to the sport, to practice, to each other and to you parents.  Faithfulness to the process will, in the end, produce the outcomes athletes want.

PEAK is about patience.  Isn’t so much of life about being patient?  Our student-athletes need to learn that when gains seem to come so slowly despite hours spent training and practicing, patience is a form of action.  Patience is understanding that success doesn’t happen overnight.  Patience calls out that there is no microwave for success.  It’s a crock pot, slow cooking to the end … and that there is reward found even in that!

PEAK is also about the kindness our athletes express toward teammates and opponents. It’s demonstrated in many ways, but starts in how we we talk to people.  Brennan Manning said, “In every encounter we either give life or we drain it; there is no neutral exchange.”  PEAK boldly proclaims that how we talk to umpires and coaches, to teammates and opponents, kindness is the better way.  The language of winners includes: “Hey! You played a great game today!”  Let us not forget that language is not just what comes from our mouths, but it’s also expressed in the slouch, the fist-bump, the high five, the hang out, the flop and the fling.

Certainly not least, PEAK is about self control.  Of course this includes the physical and mental control athletes must demonstrate in the pursuit of excellence.  But it’s also the self control shown when the call doesn’t go your way, when the rival out kicks you at the line, when the score isn’t in your favor or when a teammate gets the starting job over you.

THE STATS TELL THE STORY

These are just some of the characteristics of PEAK. It’s not only about grades, it’s about the lessons we learn and teach on the court, the track, the field and the pool that ultimately will go with our student athletes into the rest of their lives.

But there’s another reason why this is so important.  The NCAA reports that the vast majority of students who suit up in high school sports will not play their sport in college.   The stats tell the story, 94% of high school kids DO NOT go on to compete in college.

Since that is true, it should compel us to think again about winning as the top priority, or, the only priority. There is so much to offer students beyond the score of the game.

If the vast majority of King High’s athletes will, essentially, “retire” upon graduation, then PEAK, and all that it stands for, becomes all the more important.  If the end of the line is now in sight for all but six-percent of our athletes, we must be committed to giving these students something more than “the thrill of victory and the agony of defeat.” Few adults live in the supposed glory of their high school playing days.  Life has a way of moving us on, diminishing the importance of those stats from yesteryear.

PEAK addresses this reality. Through the avenue of high school sports, PEAK aims to give kids an education that can last long after the score of the game is forgotten, the winning record is a footnote and the trophies are tucked away in boxes.

What we endeavor to do is not easy. The metaphor of a mountain peak to climb implies that we are heading uphill on this. A quick look at the TV or the internet reminds us of what we are up against.  The gravitational forces of the culture around us and the tug to win at any cost pulls on us.  Our own imperfections as coaches and athletes make this a tough climb.

But climb we must, no matter how difficult the journey.

OUR CONNECTION TO DR. KING

As participants in a school named after the late, great Martin Luther King, Jr, we are inspired by the man and his legacy.  It was not lost upon us in the early conversations about PEAK, that Dr. King often used a mountain as a metaphor to inspire those who marched and toiled in the Civil Rights movement of the 1950’s and ‘60’s.

His rhetoric soared and informed.  He spoke of the “difficult days” that moving a mountain of historic segregation and discrimination must have felt like for those under its weight.

A mountain of discrimination towered in the middle of the last century.  It was like a Matterhorn in Kansas, casting a dark shadow on African Americans across the US.  It’s jagged features had been chiseled through centuries of racism. From the first slaves who arrived in the colonies manacled to the ships of the Middle Passage to their 20th century descendants who were chained to the lowlands of social, political and economic discrimination, it was a menacing monolith and for decades it seemed insurmountable.

Prior to the 1950’s, for many African Americans, racial discrimination was like Everest before Sir Edmund Hillary. Overcoming racism and its twin peak of discrimination was, in the minds of most who lived then, not possible. 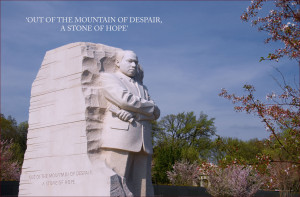 It was to that mountain that Dr. King was called. Inspired by the challenge and the moment in history, Martin Luther King passionately exhorted his listeners to overcome the temptation to retreat, to head back down to the lowlands. To those who had grown weary of living in the shadows, fearful or  tired of the ascent, he challenged them to “hew out of the mountain of despair, a stone of hope.”  He called them to keep climbing, the peak was in sight.

In Memphis, in his last public address before his death, he proclaimed he had “been to the mountaintop and had seen the promised land” and encouraged his followers that they too would, one day get there.

While our challenge in high school sports is in no way comparative to the struggle for civil rights, as we seek to honor Dr. King in the culture of Martin Luther King High, we can’t help but be lifted by the same admonition to climb, to climb higher, to keep at the task of helping student-athletes reach the PEAK of what high school sports is really all about.  There will be wins along the way, but the mountain top, the peak, is one in which life can be viewed differently because of the lessons of love, joy, peace, patience, kindness, goodness and self control students will learn along the way.  Excellence is the north star that guides our journey toward Victory with Honor and a Character that Counts.

Should we stand on that mountain top and soak in those views, well, there will really be only one word for it, and that word is “awesome.”