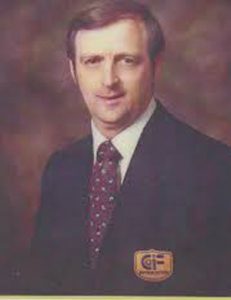 Ray Plutko’s impact on Martin Luther King High School is indisputable. Selected by Riverside Unified School District as the school’s first Principal, Ray worked tirelessly from 1993-2003 to put King High onto a path toward quick success. His model of excellence and dedication inspired countless faculty, students and community members to collectively work together to achieve that goal and the school’s athletic program reached great success within five years of the school’s opening.

One of Ray’s major contributions at King High was the hiring of an outstanding inaugural class of coaches who took King to athletic heights in remarkably few years. Ray’s understanding of the role athletics plays in the educational process was honed as a coach and an athletic administrator. Ray served as the fifth Commissioner of CIF-SS from 1980-1986. Ray left to become the Commissioner of High School Activities  in the state of Colorado for five years. His experience as an Athletic Director and the coach of basketball, baseball and cross country at four different high schools were all critical in the development of Ray’s unique and powerful understanding of athletics on a high school campus.

A state champion athlete himself while prepping at McKeesport High School in 1955, Ray’s championship mentality set King High’s Athletic Program on the right path from the school’s very first days.