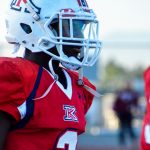 PERRIS: King traveled to Rancho Verde High School and found a tough opponent in the Mustangs, the currently 8th ranked team in  CIF Division 3. The loss puts King at 1-4 on the season. Rancho Verde played fast right from the start, something their quarterback told the Riverside Press Enterprise was by design. King scored in 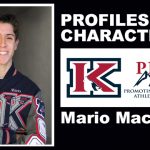 From the earliest days as a freshman in the sport of cross country, Mario Machuca has been displaying great tenacity and sportsmanship — two great traits of a young man of character.  His path has been one of valleys and pinnacles. The darkened shadows of the valley have not overcome him however; in fact they have 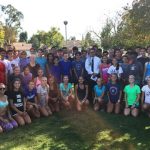 Each year the coaches of the cross country teams at King High endeavor to connect their athletes to the larger community through a variety of methods. This season, the team will forego a practice in order to compete in the “Hometown Heroes Run” on Saturday October 1. The community event was started by the Riverside Police 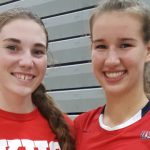 RIVERSIDE:  The volleyball team hosted Roosevelt on Thursday and behind great play by Leeza Poselski  and Mikaela Grove, King had a comfortable margin of victory in all three sets. Poselski had 8 kills on the day, while Grove finished with 13, earning her “Player of the Match” honors.  Sarah Hein continued her fine season with 9 kills and 13 Digs, 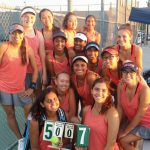 RIVERSIDE:  The ladies tennis team has been competing for a stretch on the courts of other schools, so the familiar confines of King were a welcome place to go up against Santiago High School. Call it “home court advantage”, as the girls were able to fight to a winning outcome of 14-4. “Each match was 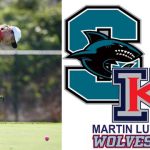 Photo Credit: Stan Lim, Riverside Press Enterprise CORONA:  The match was looming on both school’s calendars as the two undefeated squads figured it would come to this:  Win and be the unbeaten champs of the Big 8; lose and finish at best as co-champions. The Santiago Sharks and King Wolves took their contest to the 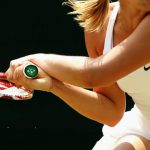 CORONA: The ladies’ tennis team traveled to Corona to take on the Huskies of Centennial and had to overcome some illness that forced the girls from King to dig deeper and show greater focus than the final score of 12-6 would seem to have indicated. “We have a few sick players” Coach Gagnon reported. “We are 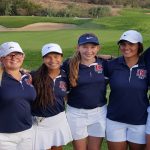 CORONA:The Lady Wolves continued their quest for an undefeated Big VIII Championship by defeating Centennial 197 to 275.  The ladies are now 5 – 0 in league.  The score of 197 is the team’s lowest  this season. The Lady Wolves were led by Rebecca Hawes.  She blistered the course, firing a 2 under par 34.  She recorded 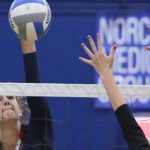 Photo credits: Jeff Edwards NORCO: “We all came out fired up and ready to play Norco” said senior Libero Monique Mercado after the game. “We played all three sets trusting each other … it was good to come out with a win.” And win they did, bringing their league record to 1-1 and an overall line