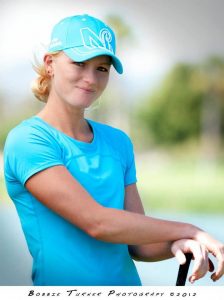 A 2005 graduate, Nicole Smith was a standout golfer on both the boys and girls teams as the King golf programs were in early stages.

All 4 years her teams earned league championships. Nicole also qualified for the CIF playoffs each year. She was the first CIF Individual Champion from King in any sport, earning the CIF title as a 9th grader in 2001.

During her high school years she also won the AJGA Apawamis Tournament in 2004, won the Kathy Whitworth Tournament in 2005, and was a Rolex Juniors All American in 2005. Nicole earned a full scholarship to the University of Tennessee. During her time as a Tennessee Volunteer she competed all 4 years  on the golf team. During her collegiate career she was chosen Outstanding Scholar Athlete, SEC Academic Honor Roll, Academic All American, and All American honorable mention.

Nicole participated in the Symetra Tour 2010-2012, competed in the Golf Channel’s Big Break television show and earned her LPGA card in 2013 where, as a rookie, won a car as the Kia Power Drive Award Long Drive Champion.