Each year the CIF State Office announces a dozen or so coaches from across the state of California as their Model Coaches of the Year. It is a program in its 14th year and is designed to recognize

coaches who have served as positive role models in their schools and communities and who have exhibited the traits apparent in the 16 principles of Pursuing Victory with Honor. Martin Luther King High School has been honored to have four members of the coaching staff receive this recognition over the 16 years of its existence.

A Model Coach demonstrates and teaches the six core ethical values: trustworthiness, respect, responsibility, fairness, caring and good citizenship (the Six Pillars of Character). The CIF believes that the highest potential of sports is achieved when teachers a/coaches consciously Teach, Enforce, Advocate and Model (T.E.A.M) these values and are committed to the ideal of Pursuing Victory with Honor. These four King High coaches, over the span of their careers, have certainly exhibited these attributes.

According to current CIF Executive Director, Roger Blake, “There is more to education based athletics than winning and losing. We honor and recognize those coaches who teach student-athletes, not only skills needed to excel but also to those dedicated to teaching them the values inherent in their becoming good citizens of this country and their communities.” 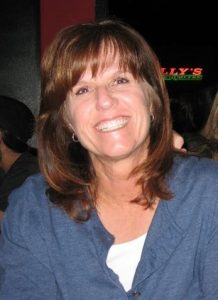 A graduate of J.W. North High School in Riverside, Becky Gagnon is among the top coaches in Girls Tennis in the Inland Empire. She and her teams have been nothing short of consistent and consistent at a high level. An original King High staff member in 1999, Gagnon has coached the Wolves to 15 league championships and 17 CIF playoff appearances. King has 6 CIF quarterfinal appearances; 4 CIF semi-final appearances and 1 CIF Finals appearance under her leadership. Along the way King Girls Tennis has won 330 matches-including at one point-an astonishing 103 straight league wins!! Her league record at King is an incredible 169-3! Coupled with her 8 seasons as head tennis coach at Arlington High, Gagnon has 454 career wins to her credit.

At Arlington, she took over a program that was on the verge of extinction and made it one of the most competitive in the old Ivy League. While coaching the Lions, she accumulated 6 winning seasons, 5 trips to the playoffs and 2 league championships. Coach Gagnon has been recognized as a State CIF Model Coach of the Year and by the United States Tennis Association for her contributions to the sport. She has also been named at league coach of the year numerous times. 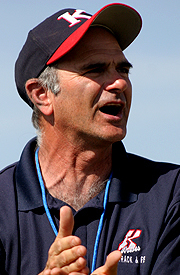 The “dean” of the King Coaching staff and perhaps among track coaches in the Inland Empire, Coach Corona has been roaming the sidelines of RUSD athletics since 1979. Under his guidance, the King Track program has become one of the best in the Inland Empire if not the CIF-Southern Section. He has been the head coach at King since 2003 and has served numerous times as the League Rep and the Meet Manager for League Finals. He also has served for the past 13 years as Meet Manager for the King Soph/Frosh Classic deemed by some one of the best Soph/Frosh meets in the CIF-Southern Section.  In 2010, he revived the Riverside City Championship meet which had been dormant for some 20 years and has been the meet manager for that meet for 7 years. The past two years, he has been instrumental in the development of the new Riverside City Cross Country Course and the staging of the 2015 CIF (SS) Cross Country Prelims on that site. He has also coordinated local track and field clinics through the Citrus Belt Athletic Directors Association.

Under the motto, Class, Character and Courage,” the Wolves track program has won a combined total (boys and girls) of ten league championships and have landed in the Riverside County Top Ten polls every year (both boys and girls) since the poll was started in 2005.  Corona has 178 career dual meet wins at King High to his credit, over which time the girls teams has been an astounding 107-14 and the boys have been 88-32. Those numbers translate to an 80% winning percentage.  Over the years, more than 80 of the top marks in Riverside County have been posted by athletes under the tutelage of Coach Corona and his staff. Annually, one sees a number of King Track athletes qualify for CIF prelims and finals. Over 8 of the past 9 years, King Athletes have made their way to the California State Championships (see kingtrackandfield.com) Corona has also served as freshman football coach at King.

Prior to coming to King, Coach Corona spent 21 years at Arlington High School. He served two stints as head track coach (1981-83 and 1994-2000). During his tenure, he brought stability to a program that had fallen on very hard times. In the process the Lions won two league championships and became very competitive.  He served as the Lions Head Basketball Coach from 1984 through 1991 qualifying for the CIF playoffs 3 times. It was at Arlington where he cut his teeth in the coaching profession as an assistant coach in track and the head JV basketball coach.  Corona also coached freshman football three seasons for the Lions. In his 31 years as a head coach at both Arlington and King,, Corona has 275 varsity track dual meet wins and 49 basketball victories.

Corona was named a 2009 State CIF Model Coach of the Year and has also named State Coach of the Year by the National Federation of High School Coaches. In 2013, he was named by the Riverside Sports Hall of Fame to the President’s Award as a Major Contributor to the Riverside community through athletics. In 2016, he was a runner-up for Inland Empire Boys Track Coach of the year. He was honored in 1993 for having brought the National Junior Basketball youth league to the city of Riverside. He has also been named a California State Teacher of the Year three times by organizations honoring his work with King’s Veteran Oral History Project-King High School Remembers. (see kinghighremembers.org)

Corona is a 1973 graduate of Alta Loma High School in Rancho Cucamonga, where he was a three-sport letter winner in cross country, basketball and track. He has a B.S. in Mass Communications from Northern Arizona University in Flagstaff, Ariz. and his Master’s Degree in Education from Azusa Pacific University. Corona teaches U.S. History at King High.

Coach Sjoerdsma began her career in her hometown at Cerritos High School after graduation from Biola University. In 1983, when she took the job, the Lady Dons were not much to talk about. She changed all of that with a lot of hard work and an accent on building class and character in her players.  In her 17 years at the helm, the Lady Dons won 274 games and were league champions 5 times. Her Cerritos teams qualified 12 times for CIF competition; including 5 trips to the CIF quarterfinals and two final four appearances.

She arrived at King in the Fall of 1999 when the doors of MLK opened. Starting her program from scratch and working with kids with very little basketball knowledge, she rolled up her sleeves and got to work. In her 10 years as head coach, her teams won 172 games; two League Championships; 8 trips to the CIF playoffs and made 1 Elite Eight Appearance. Between the two schools Coach Sjoerdsma has 446 career victories; 7 league championships; 20 CIF appearances; 6 teams that were quarterfinalists and two that made the semi-finals.

Coach Sjoerdsma was a three sport varsity letter winner at Valley Christian High in Cerritos and played college basketball at Biola University. Sjoerdsma earned her B.A. in Physical Education in 1981 and later added a minor in math. In 1991, she got her her Masters Degree in Sports Sociology from Long Beach State.  She is currently teaching PE at King. 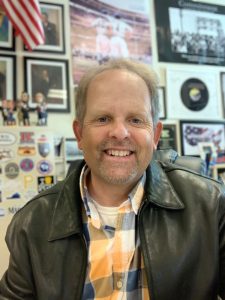 Since the opening of the doors of King High School “the race has been on” for King Cross Country and under the guidance of Head Coach Brad Peters, the Wolves have been traditionally at the head of the pack.

Since 1999 when the Wolves Boys Cross Country team won the first ever varsity league title of any sport at King, the Cross Country program has enjoyed tremendous success. At one point, the girl’s team won 10 straight League championships and they have been league winners in 12 out of the last 17 years. During the same time the boys have won 7 league championships. Both teams have never missed a trip to the CIF prelims and 16 times, the boys and girls King Harriers have made it to CIF Finals. There have been 7 times that the Wolves qualified either an individual or a team to the California State Meet. Under Coach Peters’ tutelage, there have been 10 Wolves who were League MVP and another 4 who earned Riverside County Runners of the Year (see www.kingcrosscountry.com). He served as our first track coach and under his early leadership King won 4 league championships and the Girls finished 4th in CIF Division 2 in 2003. He has produced 30 individual League Champions; 2 CIF Runners-up; a CIF Champion; 2 All-State Runners and 1 All-American. Combining his cross country and track record, Peters has 435 dual meet victories at King High School.

A King Staff original and a U.S. History teacher, Peters came to MLK after an 8 year stint as Head Cross Country Coach at Ayala High in Chino Hills. There, like at King, Peters was extremely successful. His 1992 boys’ team won the CIF Division 3 Championship and for 7 straight years, his girls’ team was undefeated in league action. During that time both his boys and girls teams made the CIF Finals every year. In 1995, his girl’s team was State Runner-Up and his boys and girls team produced five top 5 finishes at the state meet. His ’95 team was ranked 25th in the nation. Adding his dual meet victories from Ayala, Peters has accumulated an astounding 651 wins. In the spring of 2015, Coach Peters was honored as a CIF State Model Coach of the Year, one of only 13 recipients across the state.

Coach Peters attended Whittier Christian High School where he competed in cross country and track. He is a graduate of Cal-State Fullerton, earning both his B.A. and his Master’s degree.