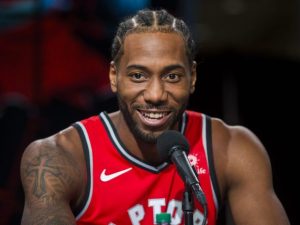 Kawhi attended King High from the Fall of 2007 until his graduation in 2009. Excelling in the sport of Basketball, he was recruited by San Diego State University where he played for two years before being drafted into the NBA where he has played with high distinction since 2012 for the San Antonio Spurs.

While at King, Leonard helped Coach Tim Sweeney’s teams to CIF Divisional titles in 2008 and 2009. He was selected as King High’s Athlete of the Year in 2009. In 2009 Kawhi received the CIFSS Dvision 1 John Wooden Award. Kawhi was also selected as “Mr. Basketball” for the state of California in 2009.

During his two seasons at SDSU, Leonard led the Aztecs to the Mountain West Conference title and back-to-back automatic bids to the NCAA Tournament, advancing to the “Sweet 16” in his second season there.