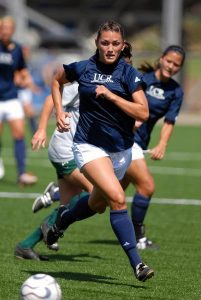 Heidi graduated from Martin Luther King with the class of 2006. Heidi was a two-sport star, excelling in both soccer and football at MLK. As a freshman in 2003,  Heidi was selected the Press Enterprise soccer Player of the Year and was named First Team All CIF. Heidi scored 100 goals over her soccer career at MLK. In football, she set the record for the longest field goal ever kicked by a female in a game at 40 yards. Max Preps named Heidi as “The Greatest Female Kicker of All Time” in 2012. In 2006, Heidi was named MLK’s Outstanding Female Athlete and to 1st Team All-League in both football and soccer.

Heidi continued her education and soccer career at the University of California at Riverside. Heidi continued to excel for the Highlanders on the pitch. Heidi scored 3 game winning goals as a Freshman, something she would do two more times while at UCR. She earned Big West Player of the Week in 2006. In 2008 she led the Big West Conference in goals per game, and was 4th in total goals and points. She finished her career at UCR ranked 5th in career goals, points, and shots. Heidi earned her degree in Business Administration in 2010.

After graduating from UCR, Heidi played professionally for the San Diego Sea Lions. Since that time, she has excelled in the world of cosmetology. She has been named by “Modern Salon” as one of the “Top 100 Hair Stylists” in the world. She also works with the “Trade Foundation,” helping Cambodian women by training them how to make a living in cosmetology. Heidi has accomplished many things and has helped others her entire life.