RIVERSIDE:  It wasn’t quite where they left off in 2020, but it was a start.  Prior to the pandemic hitting 54 weeks ago, Coach John Corona would have described his program as “just getting started” on the season. After winning the first two meets of 2020, the teams left for quarantine last March,  assuming the rest of the season would come after a short break.

So, the “restart” came in the form of a new season and kicked off on Saturday with an old rival, Poly High, a team King has never lost to. 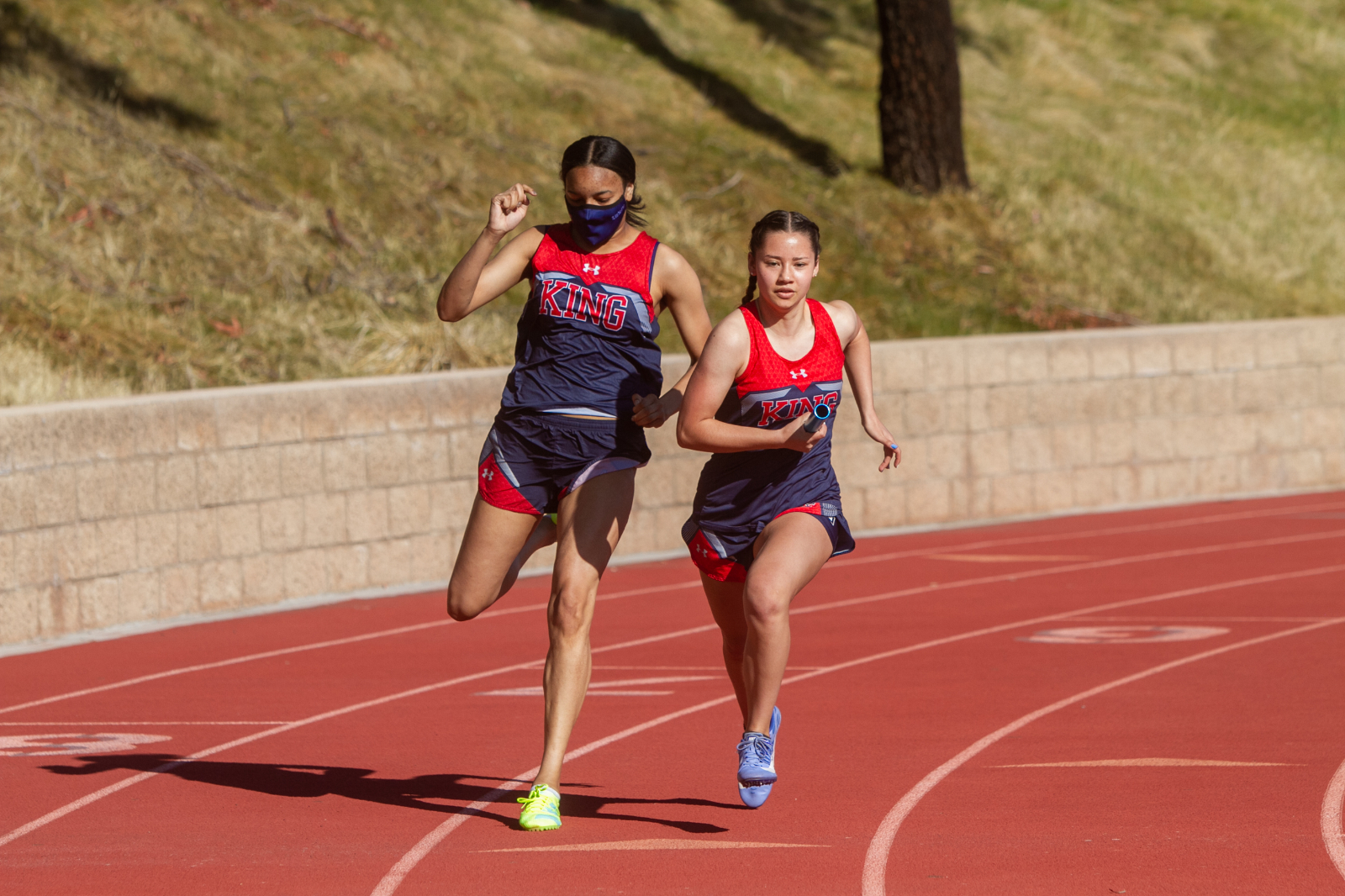 King won both the boys and girls contests; the boys by a large margin (108-23), the girls had a tighter battle but pulled away at the end, winning 70-57.

King’s 4×100 relay squads got the meet going in the right direction with victories.

The girls 1600 was won by Poly’s Kalista Tibbels, but Andrea Guadian (Jr) gave great chase and finished in third for King with a lifetime PR in 5:42.

The boys were not pushed by Poly, but the intra-squad competition was solid in many events.  Jack Slavin (So) won the 800, his first varsity victory and with a PR at 2:04.  He was pushed by senior 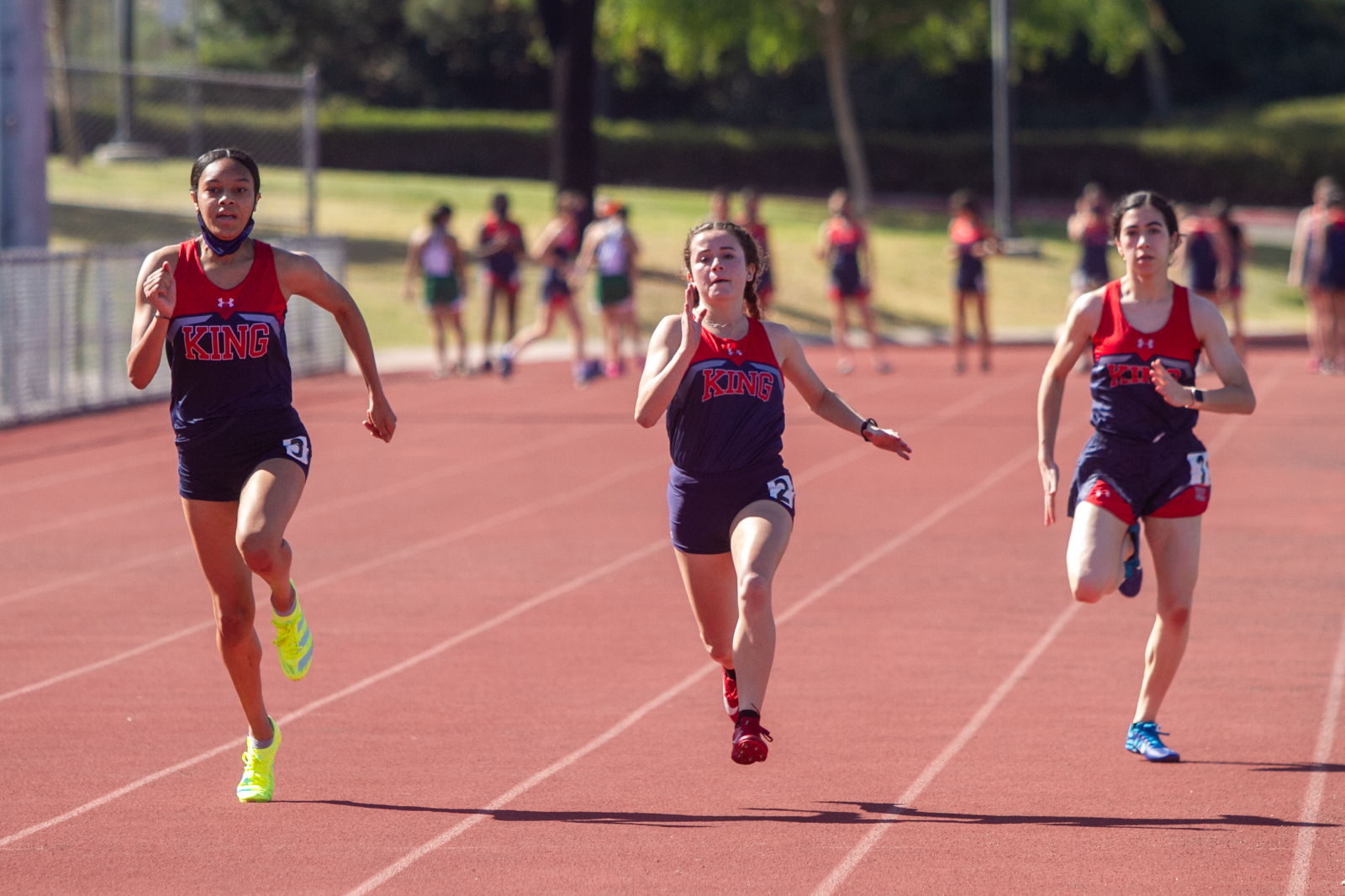 teammates Francisco Zavaleta and Edgar Ortega; all three raced hard side-by-side to the finish.  Zavaleta and Ortega doubled in the 1600 and went 1-2 with sub 4:30 efforts.

“Today was a great day for me along with my teammates” Slavin said. “The 800 really came down to a sprint off between Franny, Edgar and me. For that I’m grateful to have amazing teammates that can bring out the best of me everyday.  I am proud of my race, but not yet satisfied because I know that better results will come if I train harder.”

Jared Beasley has been training hard all winter and was soaring in the vault, winning at 14-0.  He attempted the school record at 14-4 but will have to await another day to pull off that feat. Brandon Benson, Dryden LaCour and Nicholas Wilson swept the long jump. Anthony Foye had a great day in the throws, setting two personal records; he PR’d in the discus at 128-8 to win the event and PR’d again in the shot to finish second behind winner Jacob Cook.

Both head coaches, Phil Orr of Poly and Corona would admit that its been a great challenge navigating the protocols, changes and diminished rosters induced by the pandemic.  Organizing a track program, even in the best of times, is a bit like running a three-ring circus.

But just like old times, albeit with a few changes since the last time they competed, King track got started again, and beat Poly again.  Seems like normal. 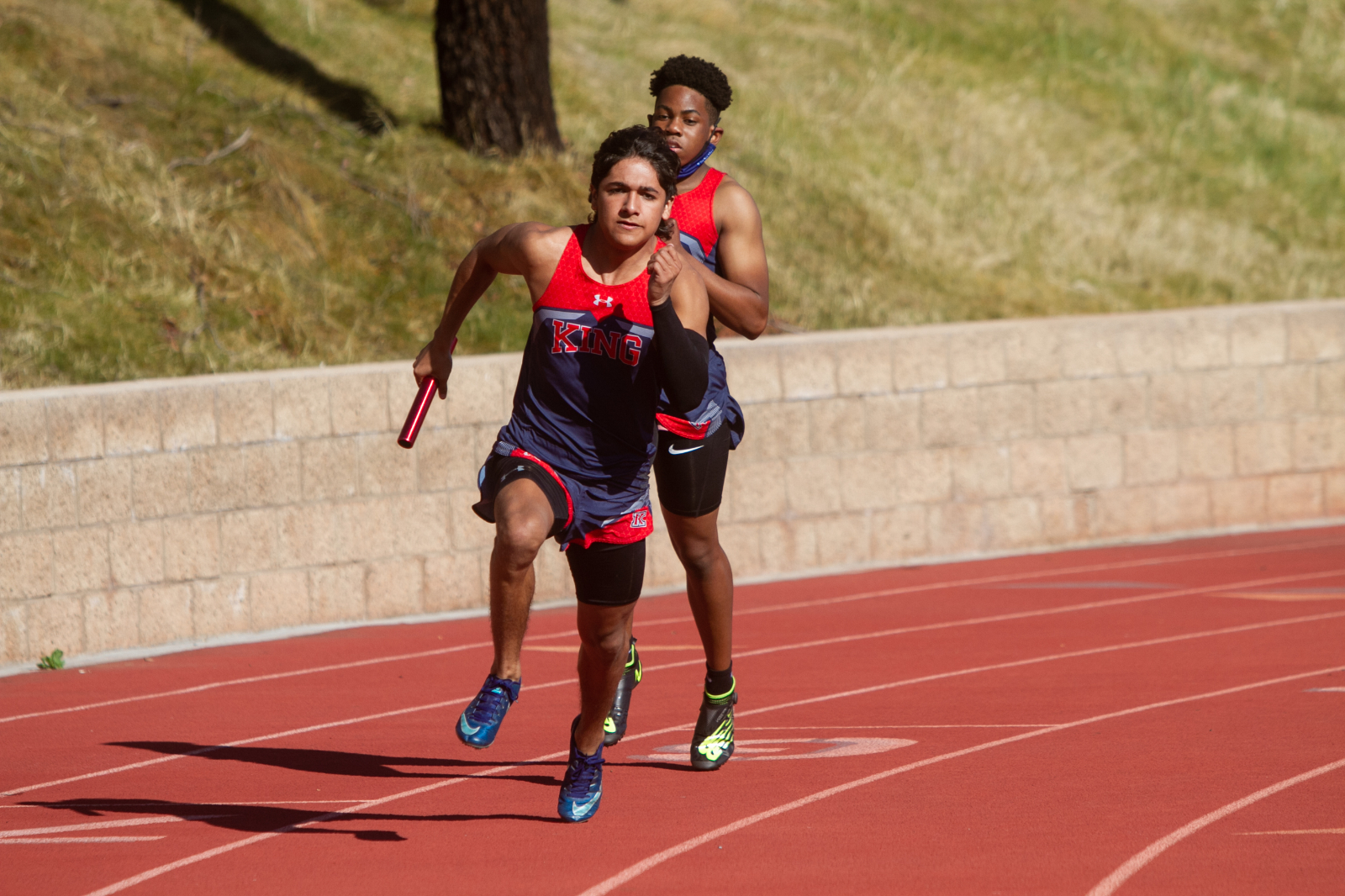 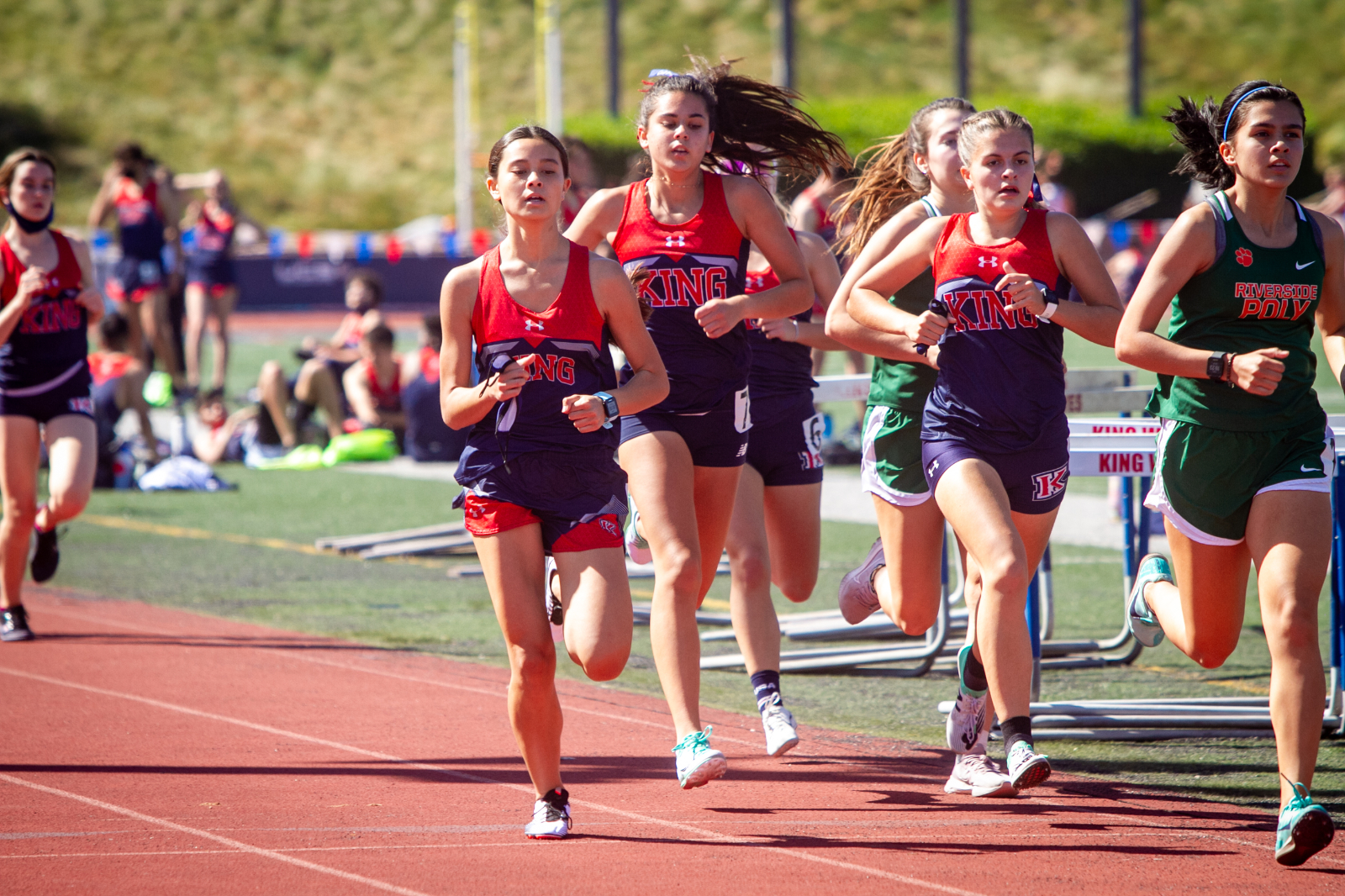 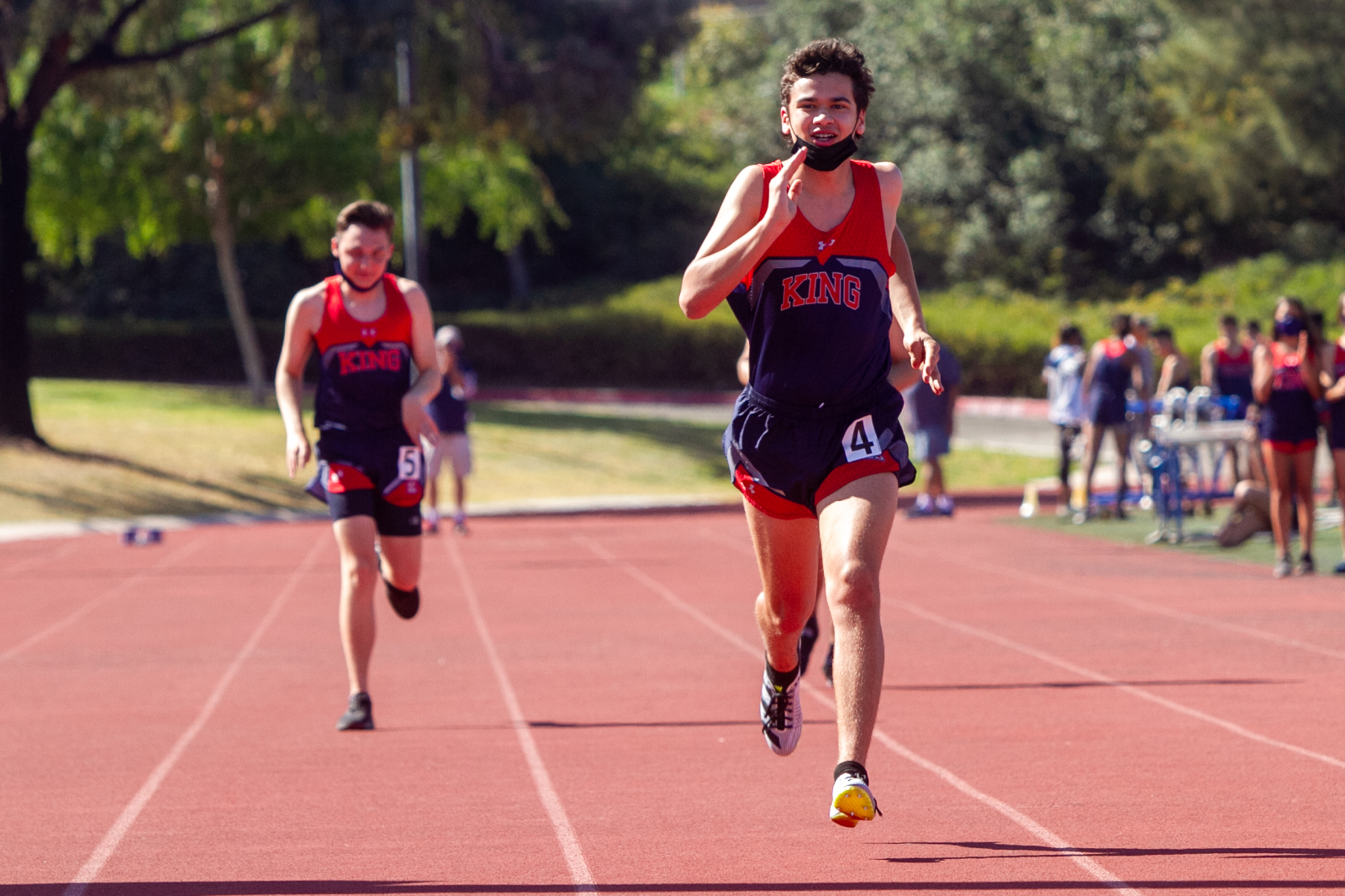 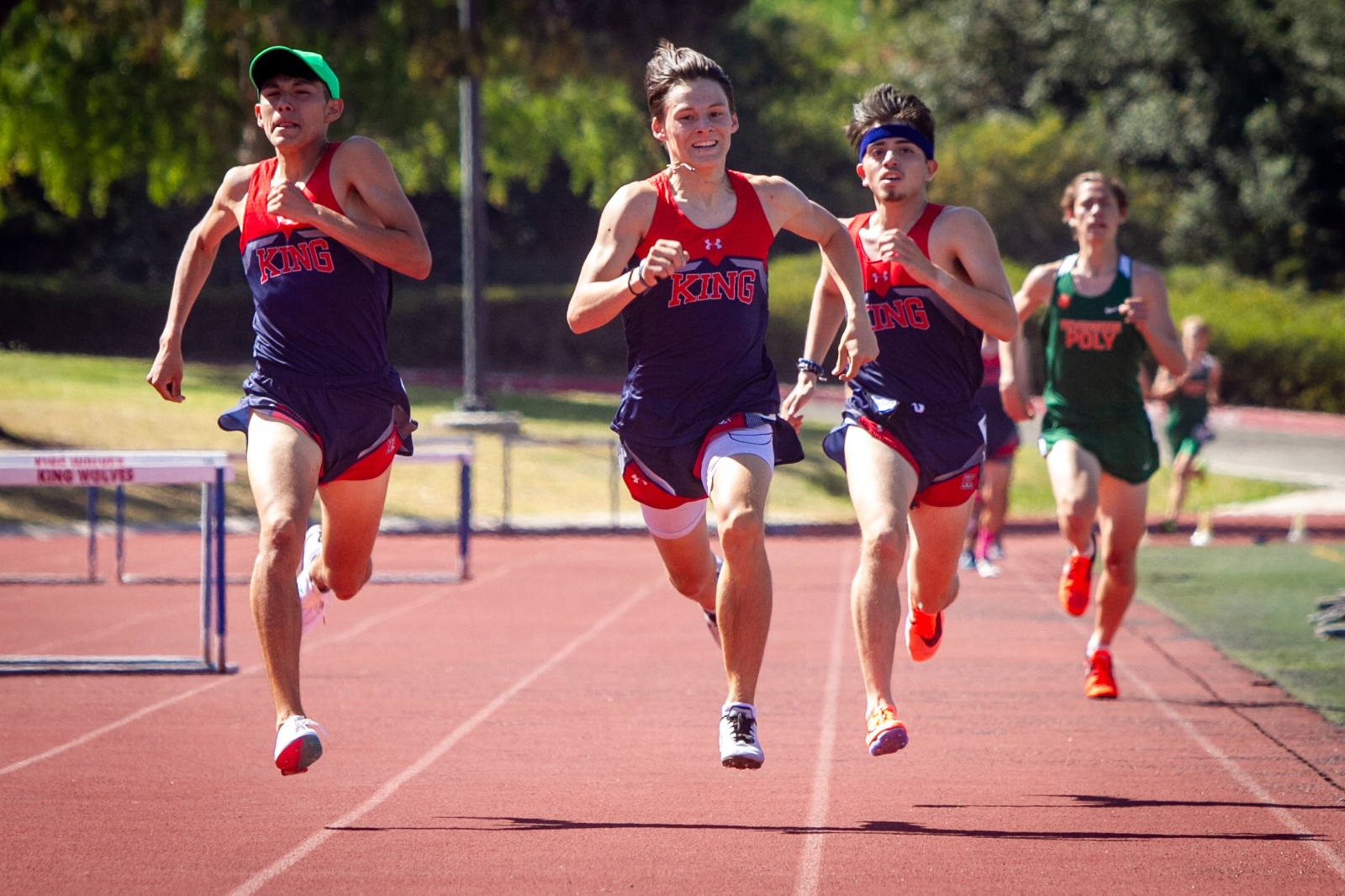