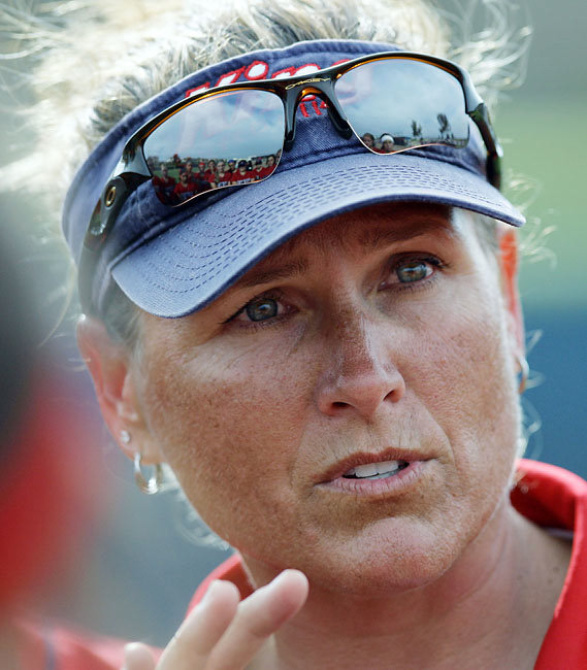 Long time King teacher and coach Lucinda Brewer has been named as King’s new Boys Golf Coach, replacing Kevin LeDuc who stepped away from the job earlier this month. (Link to story)

Though Brewer has been known mostly for her prowess as a softball coach, she cites golf as one of her great passions and has been around the game both as a player and a coach for over 30 years. As a college athlete at Trinity Christian College in Elmhurst, Illinois, she was the first female to make the men’s golf team (the school did not yet have women’s golf).

In the early 2000’s, Brewer has served as the Girls Golf coach at King helping to win some 71 matches and coaching the Wolves to 3 league championships and two trips to the CIF Regional Finals.  She was the founder of the golf program at Gahr High School in 1998 as well and the Gladiators went 43-17 under her watch. They also qualified 3 times for CIF Regional’s and twice for CIF Finals. One of Coach Brewer’s charges would win the 1999 CIF Championship.

Since coming to King in 2003, Brewer’s softball teams went 184-76 and won 5 league championships.   Under her watch the Lady Wolves have made the playoffs 7 times getting to the quarterfinals in 2003. She has been named conference coach of the year 5 times while at King and some 12 times in her career. 35 of her King athletes have gone on to compete at the collegiate level.

In the most successful season the Lady Wolves had seen since their CIF championship season of 2002, Coach Brewer lead her 2014 team to unparalleled heights. When the season was over, King was CIF Division 1 Runner-up; finished 28-6; was ranked 18th in the country; 7th in the state ; 4th overall in the entire CIF (SS);  and won the Big VIII championship. It was an incredible run for a team that relied on pitching, defense and the timely hit.

An extremely fine athlete in her own right, Brewer lettered in both basketball and softball at Valley Christian in Cerritos.  She went on to letter in the same two sports at Trinity Christian College in Illinois and was first team All-Conference catcher for three straight seasons.  She still holds the school records for innings caught; highest percentage of runners thrown out and for Runs Batted In for a single season.

She teaches PE and has been at King since 2003. She also serves as PE Department Chair.