Like most freshmen, Leo Mendez came into Martin Luther King High a small kid.  “Skinny” recalls coach Todd Mapes of his initial impression of the 9th grader four years ago who arrived on King’s doorstep, eager to play and eager to improve.

Which meant the weight room. “He knew that in order to be successful, he needed to get stronger” Mapes said.

Which is exactly what Leo devoted himself to.  “It helped him become more physical, faster, and more confident” Mapes said.

The results came quickly as he was promoted to varsity by his sophomore year and there he stayed and started until the end.

His junior year was a special one, as it was for the team.  The Wolves won the Big 8 League Title, 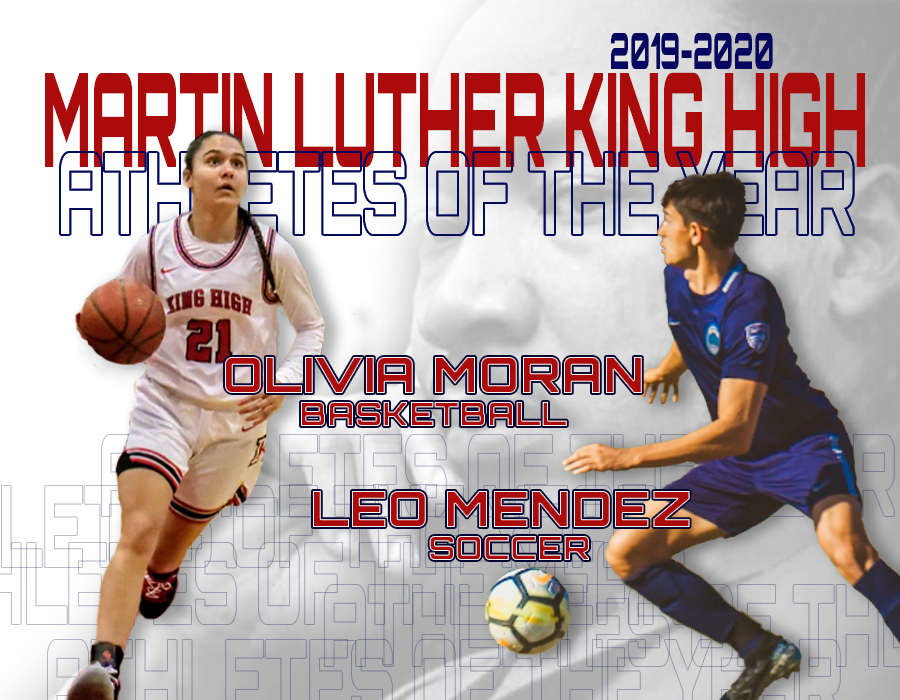 in no small part due to Leo’s contribution. He led the league in scoring and was selected the League MVP.  As a senior, he led King in scoring for a second year straight and was added to the Big 8 1st Team All League.

He closed out his career with 132 points (2 for a goal, 1 for an assist) second all time in school history.  His career earned him a full-ride scholarship to compete at Cal Baptist University, where he not only wants to earn a degree but also launch a bid at playing soccer professionally.

“I have no doubt that Leo will achieve his goals” Mapes said.  “Anyone who works this hard will be successful.”

“I’m so proud of Leo” he added. “He is proof that hard work and commitment pays off and I’m happy he has been recognized for his effort and achievement.”

We’ll never know if Leo bumped into Olivia Moran on that first day of school back in 2016, but if he did, he’d have noticed she was carrying a backpack of expectations.

“She worked hard every single day at practice to perfect and improve her skills” said head coach Jesus Martinez who coached her along the way.

She too was a starter on varsity by her sophomore year.  “By that point she never looked back” Martinez said.  In her final season at King, she averaged 15 points, 11 rebounds and 3 assists per game.

She earned a full ride to Northern Arizona University to play alongside her sister Nyah.

“There is no doubt in my mind that Olivia will be successful at the college level” Martinez said.  “Her work ethic and her drive and desire to be the best she can be is second to none.”

Soccer and basketball would seem to be two sports with little in common, other than a ball is in play.  But look at Mendez and Moran and you’ll find two student-athletes who mirrored each other in work ethic, talent and  accomplishments, including the Martin Luther King High 2020 Athletes of the Year.