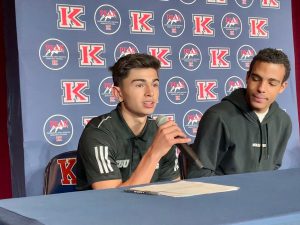 Leo led the Wolves this season with 17 goals and 7 assists.  He earned as well,  First Team All League honors in the Big8.

Most impressively, Leo finished his high school career as the 2nd all time leading scorer at King with 132 points (2 points for a goal, 1 point for an assist)

“Leo is very competitive and always plays 100%, not just in the games, but everyday in practice” said Coach Todd Mapes.

A talent like his is noticeable and led King’s opponents to double team him in games.  “It was all year” said Mapes of the defensive tactic.  “But that just freed up his teammates.  Teammates would feed off of his hard work in practice and that would help create many opportunities in games.”

Leo is self motivated, driven to improve by working out at L.A. Fitness before school and practicing on his own in the summer.

Traits that will do him well as he enters Cal Baptist in the Fall.