After spending most of her Junior season of soccer on crutches due to an ACL tear and surgery, 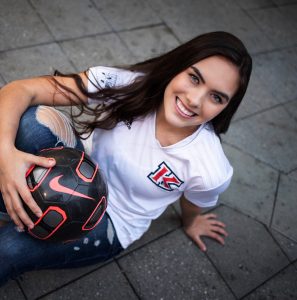 Kennedy score 12 goals on the season and added one assist.

Coach Dave Smith said of the senior, “Kennedy is a player that only knows how to play one way and that is all out with all heart. Whether it is at practice or in a game, she never stops working as hard as she can to be the best player that she can be.”

Kennedy led both on and off the field.  Her hard work was on display at both practices and games.

“She was encouraging her teammates at all times” Smith said. ” I had asked her to be a team leader this year. I wanted her to help promote team unity that had been missing in previous seasons and to continue the positive work of growing the team that had started the previous season.”

Smith noted that he likes to work closely with his team captains.  “I believe in that.  With Kennedy, she was a great source of information and insight into what it would take to be a team that played for each other instead of themselves. All of the captains played a great part in changing the attitudes that had been with the program prior to last year and I am very grateful for them.”

He added, “She has a great heart for others and natural leadership abilities which I think will serve her well as she transitions into adulthood.”

Kennedy’s four years at King spanned what was a tumultuous era with four different coaches at the helm during that time.

“Playing for King had a lot of ups and downs” she said, “but being able to play my senior year after coming back from ACL surgery really meant a lot to me. The countless hours of tears, hard work, and dedication got me to where I am today and I am forever thankful for all of my memories at King. The amazing friends and relationships that come of playing a high school support is remarkable. I am thankful to have had the opportunity to finish out my last season strong.

Kennedy will be off to the University of New Mexico in the Fall to continue to play soccer and she plans to major in nursing.