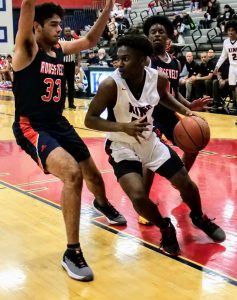 RIVERSIDE: In a  Big 8 rivalry game, King’s boys basketball team played stingy.  Really stingy, and they did it with uncanny consistency.

Roosevelt was held to 11 points in each quarter but the second in which they only got 10.  The final score was King 53, Roosevelt 43

“Very pleased” said coach Mark Vanta  “Roosevelt is a very good basketball team with many quality wins this year over high level teams. We played very well in the 1st round match-up at their place but failed to put together a second half worthy of knocking them off.” 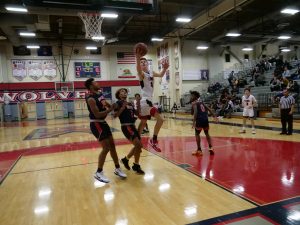 King’s frugality on the defensive side was balanced by strong offense.  Led by David Mitchell’s 16 points and 7 rebounds,  Kenny Clayton had 12 points and 2 steals; Sean Rowland put in 9 and Connor Phipps added 4 to go with his 7 rebounds.

“We defended extremely well” Vanta added, “achieving our goal of holding team to at least one 10 point quarter nearly all 4 quarters.:

King handled Roosevelt’s pressure from the start, taking control of the game early and never relinquishing it.

That pressure led the Mustangs to gambling for points at times.

The pressure from king was in the full court and in the half court.  King took  advantage of open lanes or “flashing to the ball and finishing the easy one we got out of it” to put it in Vanta’s words. “The more they scrambled the more we took advantage creating a hole they couldn’t get out of.”

Roosevelt is a good program and despite the squeeze King seemed to have on them, they kept wriggling out of the grasp and at a couple of moments had the King lead cu 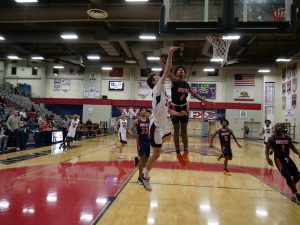 “Each time they made a push we answered with a big play, either defensively or a great read offensively… or both” Vanta crowed.  “It was a solid, hard fought win throughout.”

King improves with the victory to 4-3 in the league and 13-12 overall.