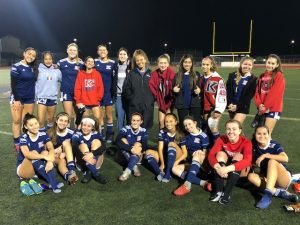 RIVERSIDE:  Round two of the Big 8 League has started and the girls soccer team squared off against Norco on Friday and earned the win, 3-2.

King got on the board at the 14 minute mark when Ashley Quiroz found Kylie Tusant with a ball into space. Tusant quickly sped past the last defender and the keeper came out to challenge.

“Kylie calmly touched the ball around the diving goalie and delivered a ball to the back of the net” said Coach Dave Smith.

The second goal came off of a corner kick that deflected off of Caroline Carlson and landed at the foot of Nea Prado who made the score 2-0.

The final King goal came off a corner kick from Malinda Sisamvang that was blocked by Norco but the loose ball was gathered by Megan Jeide who shot it in to allow King to take a 3-0 lead.

But that big lead was the calm before the storm as Norco put the pressure on in the second half and scored two late goals raising the tension and the excitement of the game.

Norco’s attack was relentless and the late goals made for little breathing room. “We were struggling” Smith noted, “and I think Norco’s pressure affected the composure of our team a bit.”  There were fouls committed, and for the fifth consecutive game, the Wolves were outscored in the second half of the game.

But nonetheless, King stood and the score remained in their favor. “The girls were able to collect themselves and trust in what we have worked on all year to hold onto the lead and the game” Smith said of the team’s ability to weather the storm.

“We need to learn how to close out games as a team. As we approach our last four league games, we need to put together a few more wins to have an opportunity to play in a CIF game.” Smith said.

Wise observation from a seasoned coach.  For if CIF is anything, it’s a coming storm.