“Family” was the operative word and was in plain evidence at the 2019 Induction Ceremony for the King High Athletics Hall of Fame last night. It was a word brought up in the opening remarks of Master of Ceremonies and former Athletic Director Tony Masi and echoed throughout the evening during the event held at the King High Gym. 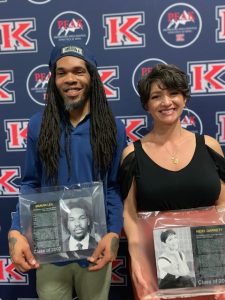 Inductees Heidi Garrett and Marvin Lea, surrounded by both their immediate families and their King High family, took their places beside last year’s inductees Kawhi Leonard, Nicole Smith and Ray Plutko in recognition of their athletic and life achievements. Both spoke in their acceptance speeches of the great support they had enjoyed from their families along the way and how, here at King, their coaches and teachers had helped and inspired them to greater heights and laid the base for their future. 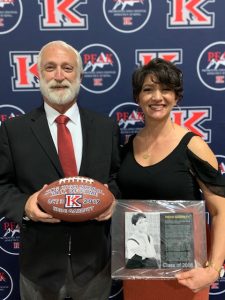 Heidi (Class of 2006) was a soccer AND football star (she set the record for the longest field goal ever kicked by a female at 48 yards) for the Wolves in her prep days at MLK. She would score 100 goals on the soccer pitch and be named all –league in both sports. She went on to a fine career at UC-Riverside finishing among the top career statistical leaders ever for the Highlanders. After graduating with her degree in Busine ss Administration, she has excelled in the world of cosmetology, been a proponent and inspiration for young women who aspire to be kickers themselves and currently, at being a Health Coach.

Introduced by her father, Rance Garrett, she spoke in her speech about how the process was more important than the outcome because the process helped make you a better person as well as a better athlete. “The lessons you learn from athletics: the discipline it takes to be the best you can ultimately be are so very important. It all helps build who you are,” she said. “Eventually, your athletic days are over and what do you have? You have those lessons; that discipline and you’ve got family and friends.” 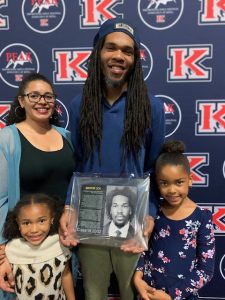 Marvin (Class of 2002) led the Wolves on an improbable run his senior year to the California State Basketball Championship, averaging 31 points per game. He would receive numerous awards along the way including CIF Player of the year; the John Wooden Award and the Press Enterprise Inland Empire Player of the Year.

Marvin competed in Track and Field for one season and in the high jump event, he cleared 6′ 6″, still the third-best high jump mark in school history.

He went on to play basketball at Pepperdine University and in 2007, he led the Waves in rebounds, steals and double doubles. Upon graduation with his degree in Political Science, Marvin started Team Eleate, a player development program dedicated to working with young people on basket and life skills.

Introduced by his brother Marques, Marvin talked in his speech about how he grew up watching the community and King High itself, grow out of the orange groves; how he used to ride his bike dribbling a basketball alongside and how, despite all the tension, hype and excitement of that run to the State Championship, “I was just playing ball.”

He thanked his family and his coaches for “Letting me be me.”

The mission of the King Hall of Fame is to  honor and recognize past student-athletes who through their time on our campus and through  their journey through life have made a difference in their school and in their community.

Because that’s what families try to do. 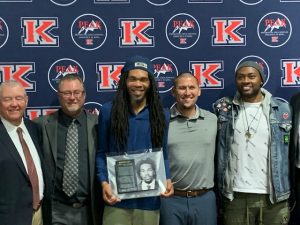