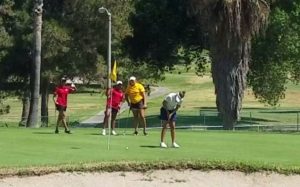 RIVERSIDE:  Hosting their annual King Invitational at the Canyon Crest Country Club in Riverside, the girls golf team got a present-tense look at what the future might hold.

It looks as challenging as a dog leg, par five bounded by three bunkers.

King tied Great Oak for second among the 12 teams that played, but it was the winner — Roosevelt — that spells trouble for King.

After losing a tie breaker with Great Oak to settle the standings, King was left  looking at their league rival atop the victory stand boasting a sister act holding the top two individual spots.  King’s girls were admittedly wondering what the future looks like for their team which hasn’t lost in league in four years.

“Roosevelt has a very strong team this year” said King coach Keith Moorman.  “We will have a lot of work to do to win our 5th straight Big 8 league championship.”

Of course, anything is possible, and with King’s Chandler Sjoerdsma busting out of a slump to finish third at 76 bodes well for the Wolves.  Freshman Jennifer Gouisikul was the frosh soph medalist on the day, shooting an 86.

The challenging showdown with Roosevelt will commence next week, when the future might become the present. For the reigning league champs, they’ll be working to maintain their hold on the past.