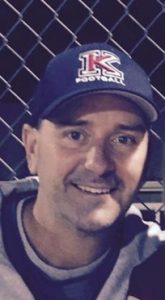 As Coach Sondra Lough resigned from the head boys volleyball coaching position at the end of last season, King’s search for her replacement landed a local with King ties, Corey Kleven.

Corey Kleven will take the helm of the boys volleyball program in the spring of 2020.  He is married to Debora Kleven who is a teacher at Franklin Elementary, and father to Bradley, Elaina and Alexa Kleven all former and current students at King High School

Kleven started playing volleyball in 1993/94 at Los Medanos College in Pittsburg, Ca.  In his first year of volleyball he earned league MVP honors and by his second year had earned All CCCAA honors at the California Community College Mens Volleyball state championship, as well Los Medanos Athlete of the year.  In 1995 his play had earned Kleven an athletic scholarship to San Diego State University under Jack Henn.

After college and through 2004, Kleven focused on Beach Volleyball earning AAA CBVA Rating, playing for the Spike It Up Tour, and AVP qualifying circuit.

He continues to remain active in Beach volleyball

Kleven began coaching in 1996 as Assistant Coach for Grossmont college, and an 18 and under boys coach for Seaside Volleyball Club

In 2003, he started coaching boys volleyball at Mavericks Volleyball club in Corona, Ca.  In 2004 Kleven coached the only Inland Empire boys club team to qualify for the prestigious USA Volleyball Open Championship.

He has owned and operated Orangecrest Volleyball club providing a grass roots volleyball experience for beginner and experienced volleyball players ranging from 10-18 years of age.

Kleven says of the game, “I love volleyball and love what the game can teach, both to me as a coach and to players.”