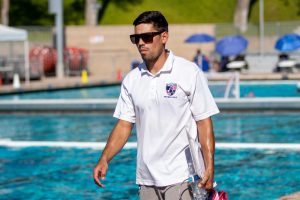 The Athletic department welcomes the newest member of the staff, Collin Marshall, who will be taking the helm of the boys water polo program.

Born and raised in the Riverside area, Collin Marshall is actually “re-joining” the Wolves’ coaching staff with over eight years of experience working with club level, high school, and college athletes. Collin has always put an emphasis on developing local athletes to strengthen the area’s water polo.

Collin started his journey in water polo through Riverside Water Polo Club where he played for over six years and was able to help his team to a 6th place national finish at the Junior Olympics in his final season with the club. Collin played his high school ball through Riverside Poly High School, where his team won CIF for division 5 his sophomore year and was able to make consecutive division 2 semi-final appearances his junior and senior years. Marshall went on to play at Riverside City College, where over his career he was able to make it to a sudden death semifinal match in the state finals and was also named an All-American and All-conference player during his tenure.

Coach Marshall’s experience working with athletes comes from time spent with the Riverside Water Polo Club, Riverside City College, as well as previously working at Martin Luther King high school. Through Riverside Water Polo Collin has been able to work with both boys and girls from the earliest ages, up to the high school level. Through this club he has been a head coach for multiple years, participating in the development of multiple athletes who have been able to earn spots in our nations Olympic Development Program. His previous coaching as one of the wolves comes from years of assisting the boy’s and girl’s programs under coaches Kevin Rosa and Casey Greenawalt. At Riverside City College, Coach Marshall assisted coach Doug Finfrock where they were able to help lead the team to a state championship as well as a third-place finish in their two years together.

With the guidance and knowledge from many great local programs and coaches, Coach Collin Marshall is hoping to guide future Wolves into successful futures.