CLOVIS:  When Reyte Rash dove across the finish line of the 101st edition of the California State Track and Field Championships he was literally the last King athlete of the year to finish competing.  He went out big and on the biggest of stages.

In a sense, that stage had started construction one year ago, when the then unheralded Rash surged through the CIF rounds and almost won the 2018 300 meter hurdles State title, losing by a fraction to Upland High School’s Caleb Roberson.

The two would return in 2019 and return with purpose.  Both had outstanding seasons of improvement.  Through the CIF rounds, the two talented seniors would share “lesser” titles in the 300 meter hurdles; Roberson took the Southern Section DI title, Rash the Masters’.

All that was left was the stage of State.  Both young men would share the spotlight again.  It was a race many were anticipating for days in advance.

Head track coach, John Corona said that the plan going into the race was to “sell out, empty the tank.”  Which is what Reyte had to to do just to catch Roberson after the Upland star exited the turn with the lead. The final 100 meters required a toll just to get close. 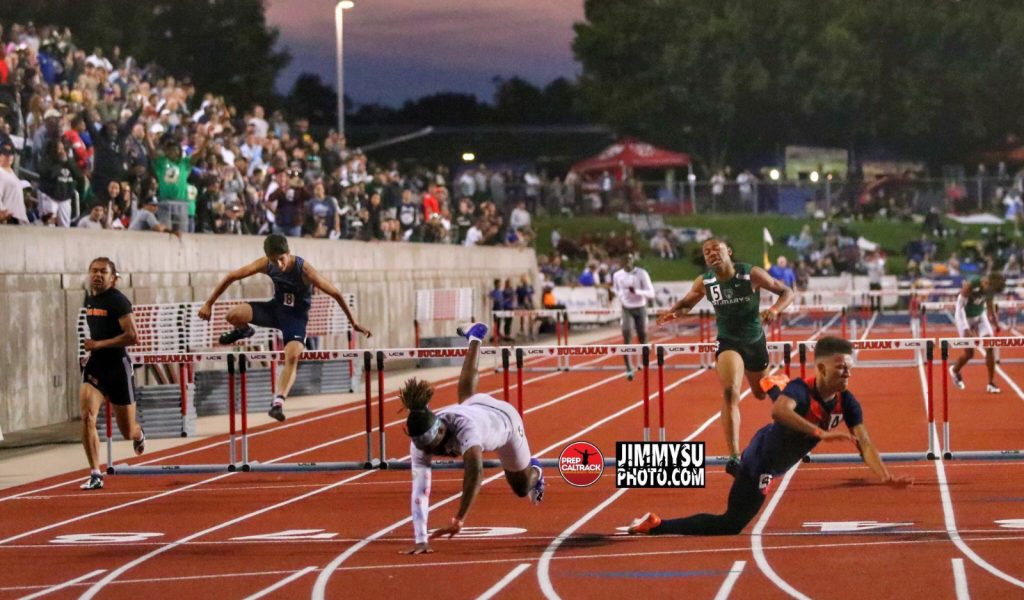 Roberson stuttered going into the final hurdle which left just enough daylight for Rash to make one final effort.

Or lunge, actually.  He dove for the line, Roberson did too.  It was that close.  9-100th’s is all that separated the two.

“That was my plan if we were neck-and-neck at the finish,” Rash told the media. “In races like this, it sometimes comes down to who wants it more. I think both of us wanted that win equally. Caleb is a great runner and we just keep pushing one another.”

That mutual pushing put both of them atop the victory stand, but perhaps even more so, atop the nation.  Roberson’s 36.32 time and Rash’s 36.41 are the second and third fastest times in the United States this year.  (click here for the national ranking)

Corona was beside himself.  “Third fastest in the country? Wow!  That a kid from King High is ranked that high in the nation! Just wow!”

Rash was proud too, though the coming-in-second part of that takes some getting used to.  “I am somewhat bummed that the same guy (as last year) beat me” he confessed, “but at the same time I shouldn’t, because third in the nation is pretty crazy.  Like, that’s the (whole country)! So I’m definitely proud but still have a small bummed feeling in the back of my mind thinking of things I could have done better.”

Feeling bummed was a normal emotion for the girls 4×100 relay squad of Raykiyat Olukoju, Sheredyn Pfeiffer, Jade Roberts, Kayla Seldon, Julianne Malolos and Anna Berry didn’t compete as they hoped to in their first-ever trip to the State Championships.  Kayla got to Fresno sick and never saw the track, and a couple of poor exchanges doomed their hopes of getting out of the Friday Preliminaries and into the top 9 of Finals. They finished 17th.

But that disappointment couldn’t dim the luster off of Rash’s accomplishment.

“Based on that time, and place, I would say he did in fact empty the tank” Corona said.  “It was great to see his career and our season end on such a tremendous high note.  He represented all of us well and what an exclamation point to another fine season for King Track and Field.”