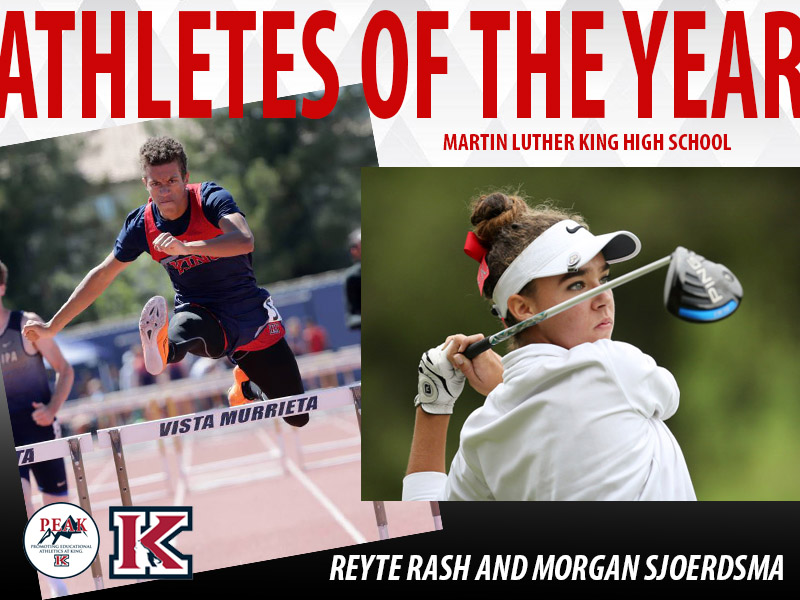 The Athletes of the Year for the King High Athletic Program are Morgan Sjoerdsma and Reyte Rash.

Morgan Sjoerdsma has spent almost her whole life golfing.  She first picked up a club at four years old.  You read that right … four.

Lucinda Brewer, King High’s former softball coach, PE teacher, and long time friend of Morgan’s parents, Ann Dena and Gregg,  was at the range that day back in 2004 and should take the credit for getting Morgan’s career going. 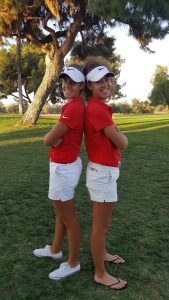 “I went into the clubhouse to get the range balls and saw a pair of Snoopy golf bags with a driver, an iron and a putter” Brewer said.  “It was around Christmas, so I bought both bags for Morgan and her sister Chandler.”

Some times an impulse buy can pay off.

The sisters soon started going to the driving range with Brewer.  Keeping it fun they would play putting games on the practice greens together.  But as the sisters grew older, golf lessons, time and ultimately the frustration that a game like golf can create almost ended their careers before they took off.

Following sound advice from Brewer’s father (and former golf coach himself) Lucinda found a new coach for Morgan and Chandler near the end of their elementary school years.

“Coach Kati Bisantz is worth a million dollars.” Brewer said.  “Morgan’s game took off with Coach Kati’s instruction, and her aptitude for being a good student along with the support of her family helped too.  It did not take long for Morgan to see the improvement, and when she starting beating me, I decided to take lessons from Coach Kati, too!” Brewer said smiling.

She got to King ready and focused, but as is fitting for a well rounded student-athlete, Morgan and her parents wanted her to have a wide array of athletic experiences along the way.  She played a season of basketball and ran two seasons of track and field.

“I believe it was her being on the track team where she gained a lot of confidence in herself that carried over to the golf course.” Brewer said.  Head track coach, John Corona agreed. “She was the consummate teammate.  She told me once that after having experienced sitting in the blocks, waiting for the gun to go off in front of like 1000 people, she would never be nervous over a three foot put again.”

Her golf game was soaring.  Varsity for all four years, Morgan was a key contributor to King earning four league titles during her career at the school.  She was the Rookie of the Year that first season and the team MVP and Big 8 All Academic for three.  She made varsity her freshman year.

In her final season last Fall, she advanced through the first two qualifying rounds of CIF and fell just a few strokes shy of making the cut in the third round for the Final 20 players to compete for the State title.  Her career is reminiscent of Nicole Smith’s from King’s early years.  Smith was inducted into the King High Athletic Hall of Fame last September.

King head golf coach Keith Moorman enjoyed every minute of the journey with the talented and gracious senior.

“She led by example” said Moorman.  “Teammates and opponents always requested to play with her.”  No surprise, she was selected for the King “Character Counts Award” and the Peak Athletic Award that reflect that integrity that is bedrock to great sportsmanship.

“It helped too that she is the daughter of two successful coaches  who provided her with the ability to help and encourage her teammates”  (Ann Dena was King’s first girls basketball coach and Gregg has coached basketball, cross country,track and tennis in his 33 year long career)

After graduation, Sjoerdsma will attend Cal State Los Angeles in the Fall and continue her golf career there.

Chances are she won’t be taking that Snoopy bag with her.

NOT A GOOFY LITTLE FRESHMAN ANYMORE

Reyte Rash (pronounced “Ray-Tay”)  had a different back story on his way to becoming one of the best hurdlers in California over the last two seasons.

He started his King athletic career playing football and appeared to have joined track in the Spring of his freshman year just to get in better shape for the grid iron.

“He didn’t have much going on that freshman year” recalls head track coach John Corona of Rash’s early days of sprinting then finding his way over to the hurdles. 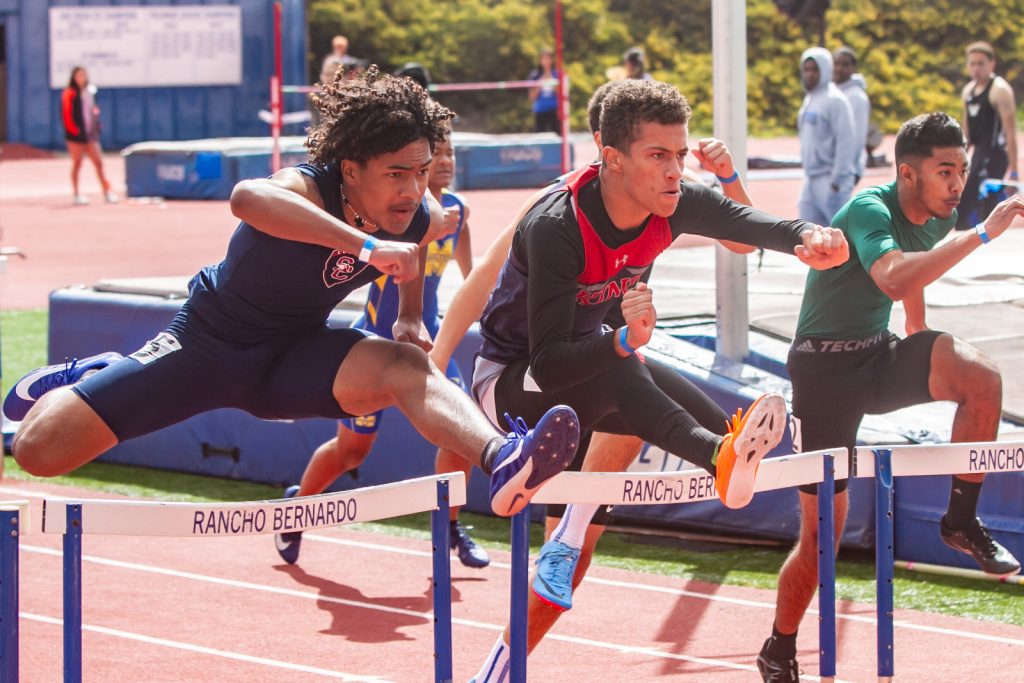 As would now seem obvious, his proficiency in the hurdle races began to show.  “He seemed to have a bit of potential” Corona remembers, “but he was pretty much just another goofy freshman.”

It was during his sophomore season that Reyte would begin his run toward stardom.  In fact, it was in the King Frosh Soph Classic invitational in 2017 where he won the 300 hurdles in a big way.

“Will Jacobsmeyer, who has been the announcer of the meet every year, still talks about that race. “He was just dominating! I thought, ‘holy cow!’ this kid is going to be good!”

Rash would go on to finish 4th in the Big 8 300 hurdles that sophomore year, demonstrating that while success was coming, there was still room for the young racer to grow.

Corona recalls, “Despite those accomplishments he was inconsistent in his effort, in his approach. But Reyte will tell you that he learned a lot watching Senior Dillon Lay  (’17), do his thing with the hurdles that year.”

So, with the example set and the taste of success in his mouth, Rash began listening with greater intent to King’s hurdle coach Ken Bracey and the climb to success began with earnest.

That success was memorialized in a last five weeks of 2018, a competitive span that is one for the ages.

Starting with the Big VIII Finals, Rash went on a unprecedented run of success in both hurdle races all the way to the California State meet. He would win the CIF Championship in the 300 Hurdles, become the first Master’s Meet Champion (best of 4 CIF Divisions combined) in King History and then finish in second place finish at the State Championships in the 300’s. He would finish 10th in the state in the 110 hurdles.

“Nobody, and I mean nobody saw that coming” said Corona.

His senior year has been just as good.  Rash was a team captain exhibiting a quiet leadership not just within his event group but for he entire team.  He won the Big VIII championship in both hurdle races (110 meters and 300 meters) and ran a leg on the League champion 4 x 100 team.  He  won major invitational races and was second in CIF D1 in both the 110’s and the 300’s.  His time in the 300’s clocked in as the 4th best in the nation for 2019. In the 300’s he won the Masters Meet for the second year in a row and advanced to State where he would finish second again but his 36.41 time would sit at the #3 time in the country for 2019!

But it hasn’t been just about himself.

Reyte has been the ultimate teammate and no greater example was the 2019 dual meet with Roosevelt. In an attempt to break up the dominant 400 group the Mustangs had, the King coaching staff entered Reyte in the 400 meter race, a race he’d contested only once during high school.  His instructions were to “just get second if you can.”

In a stunning upset, Reyte won the event in a School and Stadium record time of 48.58 and kept the Wolves in the meet. He would double back after about 40 minutes to win the 300 Hurdles. Though King would lose by a mere four points, Reyte’s incredible efforts for the cause are what coaches dream about.

When informed later about Reyte’s performance, Coach Don Jones of San Diego track power Rancho Bernardo High School commented, “It’s good to see when an athlete sacrifices and competes for the good of the team. What a great day for that young man!”

Corona concurs, as he’s had a front row seat to the rise of Rash.

“We have really been proud of what Reyte has accomplished both for him and for our program” said Corona. “However, I have been most impressed by his calm, humble demeanor around his teammates, with opponents and with the media. A lot of kids would get a blown out of proportion vision of themselves. He hasn’t been close to that.”

Corona smiled. “He’s not that goofy little freshman anymore, that’s for sure.”