The Inland Empire Championships hosted at The Country Club at Soboba Springs, coincided with a makeup rain out match between King and Centennial on Monday. This forced the Wolves to split their squad and send several varsity and JV players to both events.

The IE Championships is a unique individual tournament, similar to CIF. The Wolves had 3 scores in the top 20 of the day and Joel Gonsier also placed in the top 12. Gonsier shot a 78 to continue his hot play, and Ivan Ciudad Real and Max Kim also contributed a 78 and 82 respectively (Real lost the card-off).

In the other match of the day the Wolves defeated the Huskies 212-219. The highlight of the day centered around 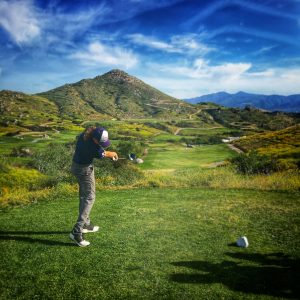 Colunga’s 35 bested his previous best round ever for the Wolves of 38 just last week at Canyon Crest. The Wolves were rounded out by Evan Chavez’s 40 and Aaron Burke’s 41 to help earn the win.

The Wolves will play Roosevelt Tuesday to try to earn back a share for the Big 8 title as they trail by a game. It should be a great contest as both teams are playing their best golf of the season.