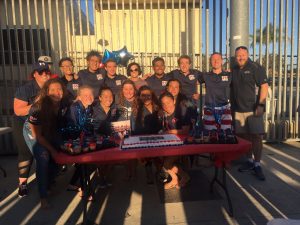 RIVERSIDE:  Sharing the Boys 2018 Big 8 League title last season was good, but Coach Leisha Masi’s team was hungry for something more. So the rematch in 2019 on Wednesday night at King High’s pool – on Senior Night to boot – was highly anticipated.

Senior Jamie Cechini reflected many sentiments, saying “It was a special moment for me.  It was both exciting, for the fact that we are undefeated at this point in the season and a bitter sweet ending in  sending the seniors off to do great things. Being able to see the love and friendship between the seniors that I have known for so long, made this particular event a memorable meet.”

“We had a big crowd, there was great energy” Masi said of the environment.

To win, King and their 16 graduating seniors being honored in their last home meet, were going to have to swim well and rely on their depth.

“The meet showed how important it is to have depth and strong 3-5th finishes” Masi said.  Centennial put several swimmers in the first spot, eating up valuable points.

But follow up points add up too and King was able to come through. “It proves the significance of the team and the ability to rise to the occasion” Masi said.

Heading in to the last five events of the meet, King found themselves down in the points on the boys’ side.  But that depth finally started to show and they were able to inch ahead by two points. 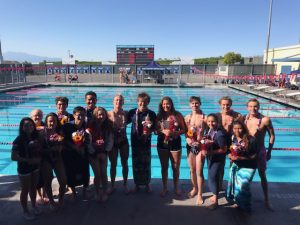 But King was able to flip the script a bit in the second to  last event of the day, going 1,2,4 in the 100 breaststroke, securing a victory if the boys finished with at least a second place in the 400 free relay. Wanting to mark the team win with a strong finish, the boys challenged 2018 state qualifiers in the same event and finished 1st and 3rd to bring the Wolves to a 93-77 victory.

Matt Howard showed great leadership in preparing his team and contributing to the win.  Howard the 50 free against a CIF and State Finalist and was part of the winning 200 and 400 free relays with fellow seniors, Samuel Xu, Ben Wolf, and Jason Howard.

Jason, who is Matt’s twin brother said, “despite a tough start (to the meet) our team displayed our toughness that we’ve echoed in training and helped us secure a very good win against a very good team.”

“We knew we would need to come in with a sense of urgency” Masi said, “to take a win against this team. Centennial has several strong swimmers and is building a great culture and program. I always love this time of year because we can see where we stack up before we begin our taper. We needed this win before Santiago next week. All the momentum we can get is crucial if we want to have a shot at beating that squad.”

GIRLS WIN THEIR MATCH EASILY
The Centennial squads are not balanced in depth nor talent so King’s girls had a relatively easy go of it, winning 119-51.

Masi used the inequity to put her swimmers in “off events” – those distances or strokes that they wouldn’t necessarily be their strong suits.  Despite that, the girls walked away with victories in all events except one.

“Jamie Cechini and Hedy Bian continue to shine” Masi said, as they showed their versatility in taking top places in events they have not swam this year. Other wins came from Amber Harris, Quincy Cechini and Molly Thornton. 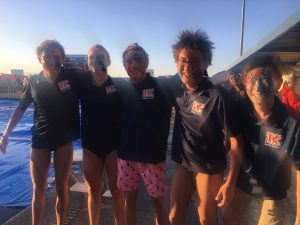 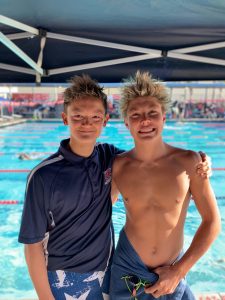 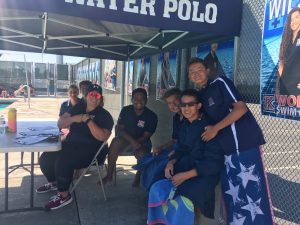