RIVERSIDE:  The King vs Santiago rivalry has largely determined the Big 8 league race over the past 6 years. During that time the Wolves have taken six league titles with the Sharks taking the other 2.

While both entered Wednesday’s match in a tie for second place this season, any shot at taking the league title would come down the match at Canyon Crest Country Club. 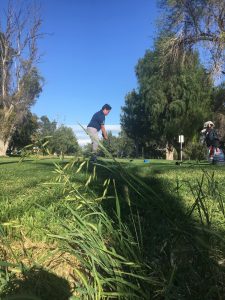 It has been said that sometimes it is better to be lucky than good. Both teams put together their worst rounds of the season in the pressure match.

At the end of the day the Wolves used senior Joel Gonsier’s 39 however to pull off the victory 216-218. Though the Wolves staggered to 12 scores of double bogey or worse, they were able to turn the match around.

With 3 holes remaining the Wolves trailed by 6 shots. As a team the boys played the final two holes even par though to flip the match 8 shots.

In a tiring week for the Wolves that has already seen five victories between the JV and Varsity teams, a win was a breath of fresh air that allows the Wolves to still take home a league title.