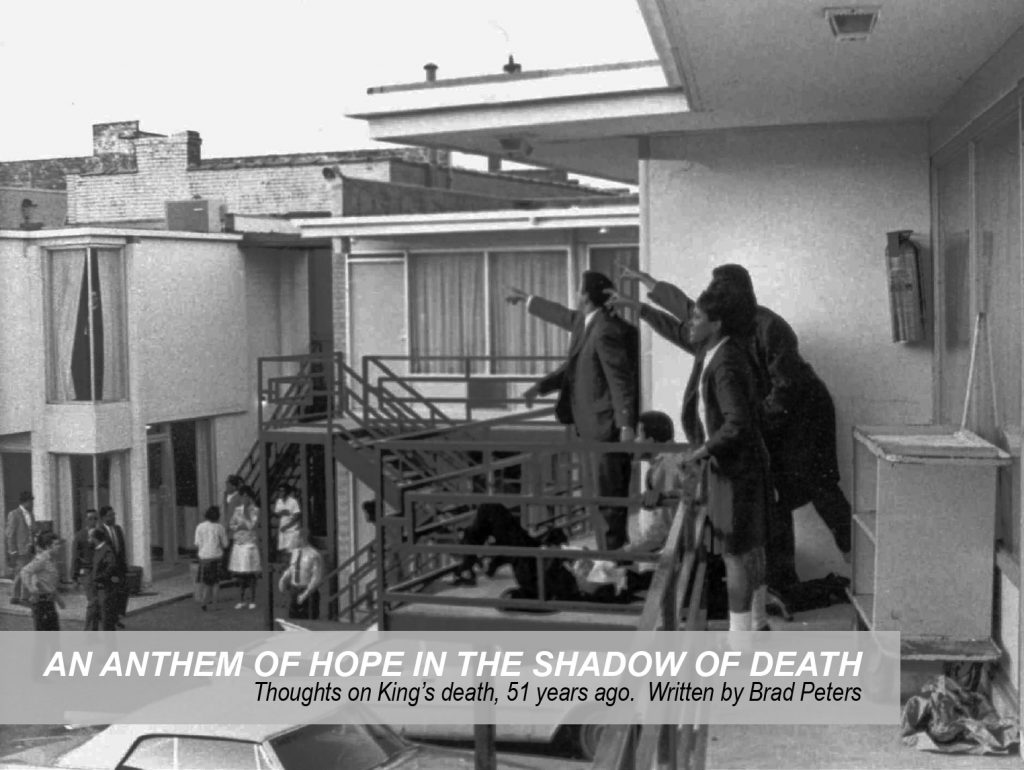 51 years ago today in Memphis, a shot rang out, it’s report echoing off the walls of downtown.  The bullet found its intended mark; a silver retort to the message and the messenger. Martin Luther King fell backward, splayed on the second floor balcony of the Lorraine Motel.  A teal blue door to room 306 stood silent behind him, his friends stood above the body and pointed in the direction of the gunman, cowarding in the bathroom of a flophouse 80 meters away.

The night before, April 3, at the Mason Temple, just a few miles from the Lorraine, Martin Luther King gave one of his most hopeful speeches.  With a thunderous storm booming overhead, a packed house heard the leader of the Civil Rights movement beckon them to the mountaintop, a figurative place he’d been to, a place from which one could see the Promised Land.

Presciently he said he “may not get there with them,” as if he knew the unthinkable, as if he knew he would be dead inside 24 hours, lying prostrate just over there, around the corner, on that balcony in front of room 306.

“Like anybody, I’d like to live a long life, longevity has its place” he thundered in closing, seemingly matching the meteorological show and tell performance going on outside.

He went on: “But I’m not concerned about that now. I just want to do God’s will. And He’s allowed me to go up to the mountain. And I’ve looked over. And I’ve seen the Promised Land. … But I want you to know tonight, that we, as a people, will get to the Promised Land. So I’m happy, tonight. I’m not worried about anything. I’m not fearing any man. Mine eyes have seen the glory of the coming of the Lord.”

His voice tailed off, spent on the effort of emotion, of the movement.

It has been said that “a tree is best measured when its down.”  Perhaps that is true of great people too. History, time, they are the benchmarks by which we make sense of our heroes.

King was not a perfect man; he was not a saint.  In that, he reflects all of us in our collective broken humanity.  Historian Harvard Sitkoff notes that history would come to reveal King’s plagiarism, his infidelity, the way in which he’d use soaring oratory to mask his organization’s lack of strategy.  His campaign for justice wasn’t fully successful; maybe because he died early, maybe because the voices of unrest drowned it all out. Maybe we’ll never know.

But as we measure the fallen King, we also see more clearly how his message — up to his last spoken refrain — was an anthem of hope.  His effort to “redeem the soul” of America, if not wholly successful, at least drew attention to an atonement that could draw us home.

Redemption does that, you know. The alchemy of hope transforms the ugly past into a brighter tomorrow.  While the shadow of every blessing can form the shape of a curse, the reverse is true too. History reads that way.  For there to be redemption, there must first be a fall, an ignominious failing.

And maybe that’s what King’s anthem was all about. Like refugees of a war torn country, his audiences back then were sojourners snaking through the shards and detritus of injustice.  To give up would be normal. But to give up would also make impotent hope’s redemptive power.

If we listen well, we can hear that refrain echo through the halls of history, even 51 years on.  We would do well to listen, even to hum along. For the tortured path of that era is, in many ways, the same trail we trod today.  Scarred and hurting, pocked by the ravages of old and new injustices, we are not where we belong. And we all know it.

Still longing for home, still looking for that Promised Land, we cling to hope.  King would have it no other way, and neither should we.

Onward, upward, we march on.