RIVERSIDE:  After suffering a difficult defeat to end last week, the Wolves got back on the winning side of things yesterday. The Wolves defeated Corona 213-271 at General Old Golf Course. The match was pretty 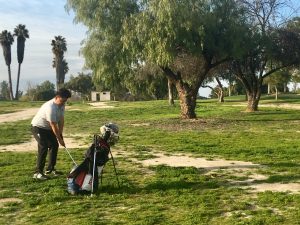 special for two players who got to play their first varsity matches of their high school career. Those two Michael Luna and Caleb Krauss shot 46 and 45 respectively.

“Last week was difficult for us” Coach LeDuc said. “We had played great thus far this season, everything just went really bad for one day. When you play your best and lose its OK. When you don’t and lose it is a little harder. This win though helped get us going again.”

Indeed, for every time we fall, redemption is waiting.

The Wolves still have a chance to pull off the league title. They will have to run the table in the final 8 matches of league. The Wolves were led by senior Evan Chavez who was able to medal in the match with the low score of 39. Aaron Burke also playing in his first varsity match of the season put together a round of 40.

The Wolves finish off the week before the break against Norco on Wednesday and Centennial on Thursday.