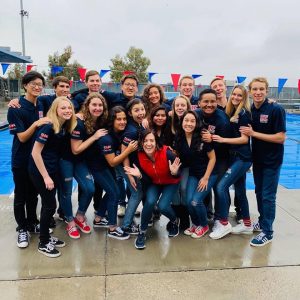 EASTVALE:  On Wednesday, King had to go deep to win, but win they did over Roosevelt.  On the girls side, the Wolves had two swimmers suffering a broken arm and a sprained foot, as well as several people getting over the flu, so Coach Leisha Masi knew her team was coming in a bit shorthanded. The Lady Wolves, however, scored first place finishes in 9 of the 11 events, helping with the subsequent missing depth in some key events.

The team of Valerie Juarez, Molly Thornton, Kristina Arcerito and Hedy Bian opened with a win the medley relay. Soon after, Amber Harris had a first place finish, with Maria Roidan showing her true grit coming in a close second place behind. Bian, Thornton, and Juarez all swept the 200 IM, setting the Wolves up for a strong point spread early in the meet. Freshman Abigail Colwell made her varsity debut, dropping more time in both her 50 and 100 freestyles and finishing third and second in her events, respectively. Despite having the flu the day before, Harris swam to her second victory in the 100 fly with at time close to her personal best. Arcerito won the 500 freestyle by a seven second margin and helped the Wolves to first place finishes in both the 200 and 400 freestyle relays. Juarez and Thornton also swam to victory in the 100 backstroke and 100 breaststroke respectively.

The Varsity Boys endured another nail biter until the back half of the meet.  “It proved the need to use our depth earlier in the meet to keep the spread wide.” said Masi.

Freshman Evan Ausmus raced to his first place finish in the 200 freestyle, followed by teammate Will Tibbetts, who continues to swim at his best all season. Seniors Ben Wolf and Samuel Xu finished 1-2 soon after in the 200 IM.  Matt Howard showed his level of fitness early into the season with a best time and first place showing the 50 freestyle with close to best time and first place in the 100 freestyle as well. Coming in to the last four events of the day, the boys were only ahead by four points.  Noting Roosevelt’s strong sprinting and breaststroke contingent,  Matt Howard, Ausmus, Tibbetts, and Wolf finished with an easy win over the Mustangs. Swimming in not his best event, Xu secured a needed victory, while teammate Matthew Hamburger and Aden Peralta stepped up to play their parts, earning 3rd and 4th place finishes. Ben Wolf and Jason Howard went 1-2 in the last individual event of the day with Wolf nearly securing a team record in the 100 breaststroke.

“We had great energy heading in to this meet, said Quincy Cechini, “despite being down some key swimmers. I liked our team spirit and togetherness and I think that will only get better as we move forward”

To wrap up the win, both Matt and Jason Howard, along with Xu and Wolf scored the last win of the day in the last relay of the day to add to the victorious scoreboard.

“We always swim well at Roosevelt’s pool, and today was no exception.” Masi said.  “The weather finally cooperated, but despite these positives, our kids continue to excel as teammates and good people. We have had some tough meets and no matter the conditions or competition, we continue to show up for each other.”

In JV action, the girls won by a large margin, 103-66.  Valarie Domingoes (10) scored two individual victories and dropped considerable time in both her 200 and 500 freestyles. Additionally, Caitlin Leach had two wins in the 200IM and 100 Fly and Rachel Shah scored victories in the 50 free and 100 breast, moving all three closer to a top four spot for League finals. They teamed with Isabelle Madarang to finish first in the medley and 400 freestyle relays. Madarang  also finished with a win in the 100 back and a second place in the 200 IM.

It was a bit closer in the JV boys, but King won 97-73.  Notables Curtis Chen won both the 200 IM and 500 freestyles, showing his versatility and improvement. Travis Feimer secured two first place finishes in the 50 and 100 frees, with King’s Dennis Kim and Garret Arnett helping to sweep that race, respectively. King also swept the 100 butterfly, with an all freshman showing of Jacabo Juarez, Luke Lowry, and Jeremy Marin helping the Wolves vault up the score. Juarez also had a first place finish in the 500 freestyle.  After winning the 200 free relay, freshmen Nathan Newman and Luke Lowry earned a 1-2 finish in the 100 breast. King also finished 1-2 in the 400 freestyle relays with Feimer, Daniel Herbert, Kim, and Chen scoring top bill while Marin, Newman, Lowry, and Jaden Hernandez finished second.

Coach Masi summed up the successful day.  “I am happy we are swimming so well at this stage of the season. March can be a grind with Spring Break and the final week of the quarter approaching, but these kids remain consistent in practice and in their efforts. I think that’s showing in their mid-season times and should certainly give them confidence heading in to the back half of the season.”