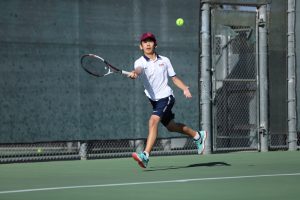 While Corona High wasn’t at the same level of talent as some of King’s recent opponents, the win was a win and something King was pleased to have.

King didn’t allow the imbalance to affect their play, and played with maturity and competitively.

The match up also allowed Harris to tweak his line up.  King’s Number 1 and and Number 2 singles players were combined into one doubles team in played in the 3rd set to experiment with a potential future doubles team.

While overwhelming victories can often seem underwhelming in the moment, they do give the better team the advantage of using the contest to prepare for future and greater challenges.

Which is exactly what King and Coach Harris did on Tuesday.