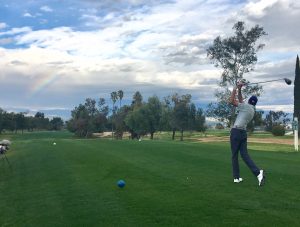 The Wolves took on the Pumas of Chaparral Tuesday in a battle of two of the tougher teams in the Eastern Region of CIF. After tying the opening tournament of the year (The Wolves won on the tiebreak), and the Pumas beating the Wolves on Monday at the Poly Classic, both teams squared off head to head.

In a unique format both teams went away from the traditional “stroke” format to play a match play event. Made popular in the Ryder Cup, and used for college national championships both teams put their players in a head to head format where you are only trying to beat one player. In what proved to be a fun but intense match the Wolves were prepared on their home course.

Kevin An went out as the Wolves number 1 and after a 2 putt par on 8 was able to close out his match. Ivan Ciudad Real and Max Kim played as the Wolves 3 and 4 and were both able to pull out ties to the Chaparral counterpart. While Chaparral came from behind to get the tie on 9, Ciudad Real pulled off a big comeback to draw the match on the final putt of his afternoon.

The Wolves depth really showed in the final group as both Jason Green and Evan Chavez closed their opponents out by hole 8.

While match play is more individual, it is a fun element and still allows for a team victory. It was a great showing by the Wolves to move their season record to 4-0.