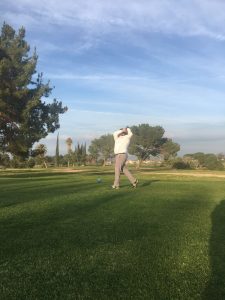 The King Wolves ended a perfect first week of the  season, as they capped off the week with a win over Murrieta Valley. After already winning the Riverside Cup on Monday and picking up two victories on Wednesday the Wolves won a nail biter against the  Night Hawks on Thursday.

King and Murrieta Valley actually face off against each other 4 different times in the first 2 weeks of the season; twice in tournaments and twice head to head.  Led by the Oregon bound senior Edwin Kuang Murrieta Valley gave the Wolves everything they could handle. “It has been a long week so we were kind of mentally drained by the end. We were glad to get the win but they definitely pushed us today,” said senior Joel Gonsier.

The match ended up going down to the final group of the afternoon. Heading into the last group King trailed by one stroke. Needing to pick up a stroke on the final hole, both teams faced putts that could swing the match. Murrieta Valley had an 8 foot putt to win the match and barely missed. It was then senior Evan Chavez turn to try to make a 5 footer. A make would put the teams into a tie at 212. Though Chavez didn’t know the match hinged on this one putt he was able to bury it into the corner of the cup. With the score tied 212 to 212 the tiebreaker went down to the 6th man score.

For the second time this week King proved victorious with the help of a 6th man. It capped a perfect start to the season.  Low scorers of the day were once again the freshman duo of Kevin An 39 and Max Kim 41.