RIVERSIDE:  Rivalries always tend out to bring the best in the competitive spirit, and the swim team’s meet against Poly proved no exception. But it wasn’t just the 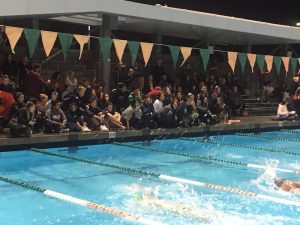 positive outcome of coming away with a clutch win, it was the poise, focus, and strong character that made the best in the athletes’ efforts shine. The previous day’s team meeting focused on how the team wanted to feel when it left Poly’s deck the next evening. Ultimately, the team wanted to be left with an unabashed joy that comes from strong battle to earn victory.

The focus for the meet was to go in fighting for every finish as every event was sure to remain close. The meet proved just that, with the lead shifting back and forth several times for both the girls and the boys. Despite the constant shifts, the momentum of the meet and the spirit and energy of the crowd kept the excitement level high. 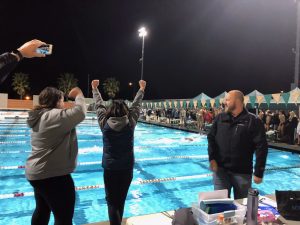 Head Coach and Poly alum Leisha Masi knew what the stakes were against her alma mater, saying,  “We knew that in order to win, we had to show up. There would be no sauntering in or taking our time or losing any sort of mental edge. Poly wants to beat us as much as we want to beat them. We walked in with such a sharpness, I knew it was going to be a good day.”

Proving the significance of depth, the girls finished with a win in eight of the eleven events contested and came away with second place finishes in each of the others. The girls score remained within four points moving in to the last three events of the evening, but 1-2 finishes in both the 100 backstroke and 100 breaststroke, gave the girls the security they needed moving in to the last relay of the night. Those wins were crucial as a first and third finish by Poly in the final relay of the day moved the final score to 86-84 in the Wolves favor.

Freshmen Jamie Cechini and Hedy Bian won both individual events and helped the A medley and 400 freestyle relays with a first and second place finish respectively. Sophomore Amber Harris also secured two wins for the Lady Wolves in the 100 butterfly and a near best time in the 500 freestyle, pacing herself to a come from behind victory in the second half of the race. Hard fought second place finishes for Valerie Juarez in the 100 back and Molly Thornton in the 100 breaststroke helped to secure the win for King.

Last year’s Boys’ loss to Poly left a bitter taste that could only be resolved with a win. The 2018 version left the Wolves with a win in the water after the last relay of the day, 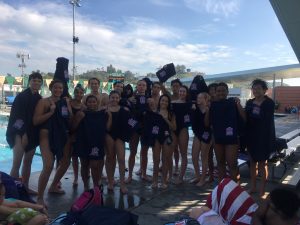 but a last minute celebration and jump into the pool by a King swimmer, disqualified the team and lead to a loss. The boys had the conviction to do all of the little things right and find a way to beat a strong Poly squad.

Like the girls, the boys score shifted throughout the meet, and the ebbs and flows of the meet lead to highly contested races throughout. The boys also pulled off victories in nine of the 11 events, but again, depth prevails in the high school setting.

“This is why we talk to kids so much about not relying on our top swimmers only and thinking a win will get the job done” Masi said. “Several times throughout the meet, kids thought we were winning handily. It was important to keep track of the score throughout to show how close it really was. Fighting for those 3, 4, 5 finishes are critical.” 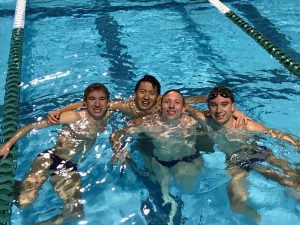 Solid 1, 2 finishes in both the 200 free by Matt Howard and Will Tibbetts and 200 IM Samuel Xu and Juan Ladinez and a win in the 50 freestyle, by Ben Wolf gave the Wolves an eight point lead heading in to the 100 butterfly.  But with Poly going 1, 2 in that event and 2nd and 3rd in the 100 freestyle, it moved the Bears in to a one point lead going in to the last half of the meet. The score continued to vacillate, but a first and second place finish in the 500 freestyle (Howard and Ryan Seraf) proved to be quite fruitful as Poly scored huge 200 freestyle relay points with their own 1,2 punch. Wins in both the 100 back by Xu  and Jason Howard’s 100 breast victory gave the Wolves a mere one point advantage moving in to the last relay of the day.  “The kids at Poly put up a good fight but in the end the unity and competitiveness of the King swim team ultimately led us to the win in the end. The King team this week proved to be a strong force to be reckoned with” Wolf said.

With screaming fans surrounding the Poly venue, the Wolves maintained a slight advantage throughout the race,  holding just a one second margin before taking the anchor leg.  Wolf, staying composed despite some taunting by his competitors, finished with a solid leg to take over Poly’s CIF finalist relay team and the team King lost to with the 2018 disqualification.  A strong third place finish for the Wolves B relay of Tibbets, Ladinez, Seraf and Josian Anich, earned King  10 points in the last event of the day to take home this year’s mythical cross-town trophy.

“This meet was personal” Matt Howard said.  “There was nothing more satisfying than winning, especially for us senior boys. It really meant a lot for us.”

And most significant, the meet ended as it had began, with great pride, joy and competitive fire that gave King the edge over the Bears.