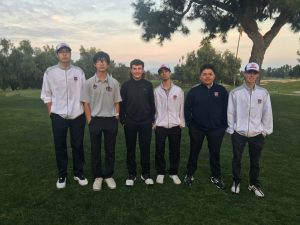 Over the past 19 years, the best of Riverside Golf has usually been defined by the results  between the Poly and King match. In a 3 way team match yesterday the Wolves took hold of this year’s cross-town story. King continued its marvelous start to the 2019 season by moving to 2-0 with wins over Poly and Great Oak.

The match was defined by the new and old coming together for a great performance by the Wolves. 3 seniors and 2 freshman did the scoring for the Wolves. The three seniors Joel Gonsier, Ivan Ciudad Real, and Evan Chavez shot 41-40-42 respectively to  help the Win.

The heroes of the day however were the freshman duo of Kevin An and Max Kim who shot a 36 and 40.

“Max Kim’s 40 was his low score of the year, and he really stepped up under the pressure. There are about 5 matches a year that are a little more intense and focused than the others. Players usually tend to fold or peak in these moments. The freshmen really rose to the occasion in the first pressure match they would see as high schoolers” said Head Coach Kevin LeDuc.

The entire match came down to the final group where Great Oak needed a good score to overcome the Wolves.

“In the back of my mind I knew we lost barely to Great Oak in tennis a few days ago, so I was hoping we could flip the script this time for the school.” LeDuc said.

The three schools will all see each other once more on Monday in the Riverside Poly Tournament at Victoria CC.