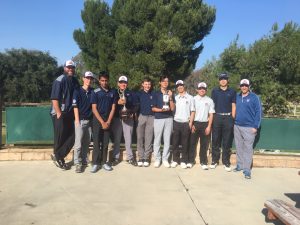 The Riverside Cup has been hosted by King High School for the past 14 years. In a small sense it is like the Stanley Cup of high school golf. It is large, decorated, and even includes misspelled names (Like PGA Golfer Rickie Fowler spelled Ricky on the trophy).   For the first time in those 14 years though it is coming back to King High School. In the season opening tournament the Wolves were able to bring home the title after winning a tiebreaker to Chaparral High School on the 6th man score.

“We were hoping to just play well as a team, and have everyone step up” said Coach LeDuc. “After losing Johnny Walker to a move out of state, we knew for us to succeed this year it would take an entire group effort. Last year we relied so much on one player for a lot of our scoring.”

This season would have to be different though for the team to push to new levels. That all started with the scoring of 2 new freshman. Kevin An and Max Kim jumped right into their first high school events, and contributed key scores to the Wolves win.

An comes into King with big shoes to fill as the low scorer of the pre-season. He did not disappoint in the first tournament by firing a 73 on an extremely difficult 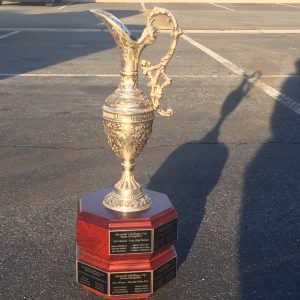 course. He finished 1 shot out of the lead and had several chances to nearly win the tournament down the stretch. Using his low score was the difference King needed. The rest of the team balanced out the scoring with 4 scores in the 80’s. Seniors Joel Gonsier and Ivan Ciudad Real fired 83 and 84 respectively. Max Kim and Chase Colunga rounded out the top 5 with 87’s. While nobody played the perfect round, what really made the difference in the win was that nobody gave up.

When the dust settled both King and Temecula Chaparral sat at a score of 413. In golf the tiebreaker goes to the score of the 6th man, who’s score is normally dropped. Eshaan Mehra’s score of 92 was the difference maker. A true reflection of why even when it seems a score is no longer important to the team, it’s important to push on.

Overall it was an amazing way to start the season. “It was the first team title I have been a part of in my 9 years as coach, so it was pretty special. Especially considering it is the tournament we host and has our city on the name of it.”

Hopefully it is a sign of the great things to come this season for the King Boys Golf Team that will be once again chasing a league title in the Big 8 and trying to contend for a CIF championship.

Results of the Tournament