If He Walked These Halls: A Reflection on Martin Luther King Day

Swing wide the front doors of King High, enter, and you’ll come face to face with Martin Luther King. Not in 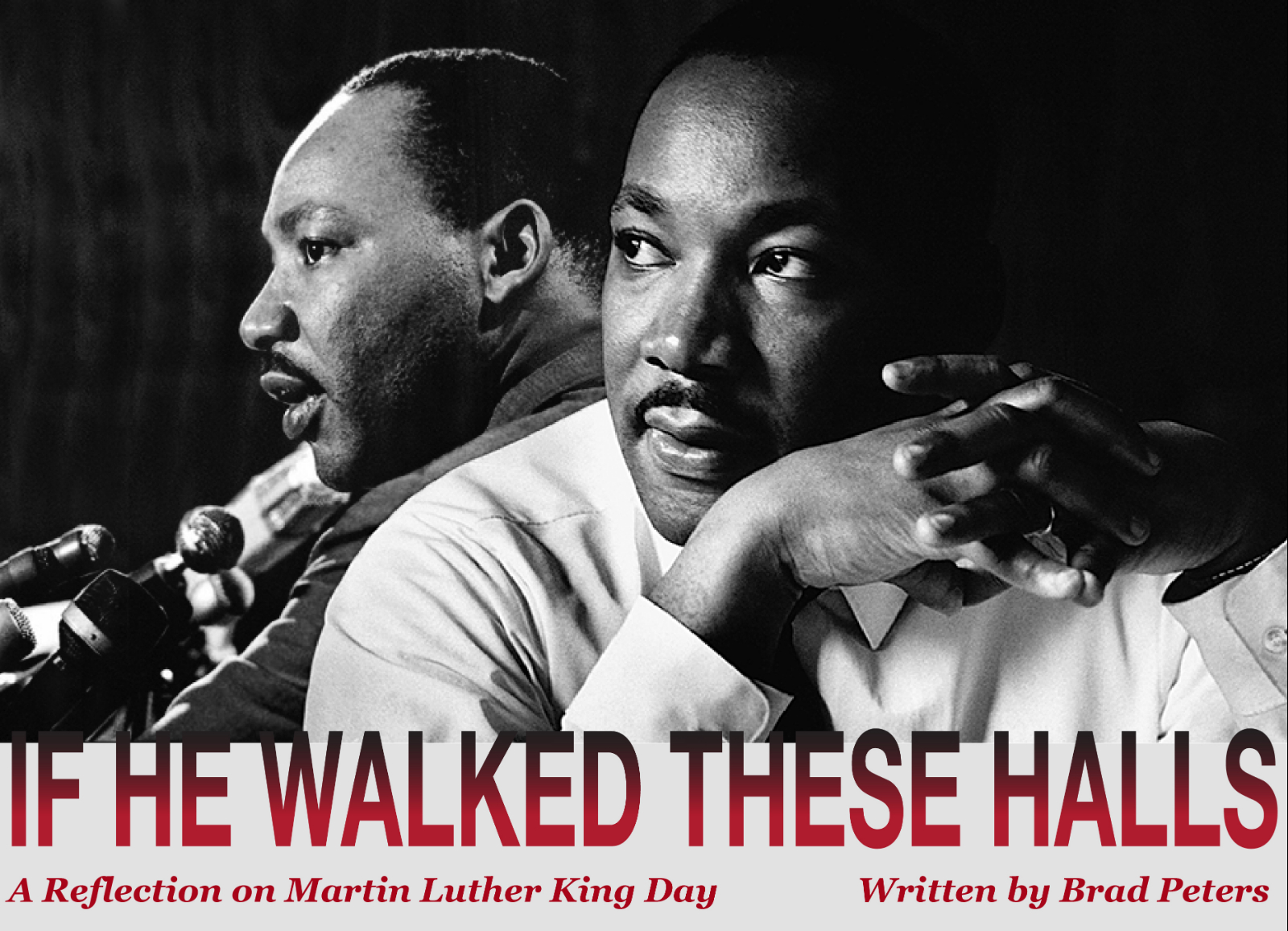 person of course, but by way of a large mural that wraps a wall from floor to ceiling. On it is an image of Dr. King.  His face is intent, focused.  There is no hint of distraction or fear; this school’s namesake is captured in monochrome shades of resolve.

We live in a technicolor age of distraction, illustrated by the current cultural fascination with the “selfie;” an odd practice where we become our own paparazzi, taking and then posting images of the one thing we haven’t yet lost focus on.

In a way, the mural in the A-building is like a selfie of King.  So, would he do as we so often do and critique it? When our selfies demand better light or hair, it’s easy to hit delete and try again for a more post-worthy shot. Would Dr. King ask for a do-over or would he like the image we chose of him?

But a better question would be this:

Would Dr. King like the school we’ve named after him?

Would he smile and say “well done!” or would he curl up his face and say we could do better?

I really have often wondered this.  If Martin were alive today and walked our halls, sat in our classrooms, watched our games and listened to our conversations, what would he say about us, the people of King High? What would be his evaluation of this school that bears his name?

In 2007 I led King High School’s cross country teams to Birmingham and Montgomery Alabama to compete, but also to see the civil rights landmarks in those cities made famous by Dr. King, Rosa Parks and others.  That experience captured my imagination not only of the past, but my hope for the present as well.  For 11 years now, I’ve been on a quest to understand Dr. King at a deeper level. Despite dozens of books read, I am not done, but this one thing I know: However complex King was, no matter how nuanced and layered his perspective on Civil Rights, his life really can be reduced to one thing, and I think that one thing is what he’d use to evaluate our school … If he walked our halls … if he listened to our conversations … if he sat and ate lunch with us.

In early 1956 as the Montgomery Bus Boycott was just getting on, Martin Luther King was worn down by countless death threats and admitted that he was nearing the end of his strength right there at the start of the battle. Unable to sleep, he made a pot of coffee and sat at his kitchen table in the middle of the night frightened, lonely and tired.  Later he would write about what happened:

“The words I spoke to God that midnight are still vivid in my memory.  I am here taking a stand for what I believe is right. But now I am afraid. … I am at the end of my powers. I have nothing left. I’ve come to the point where I can’t face it alone.

At that moment, I experienced the presence of [God like never before]. It seemed as though I could hear the quiet assurance of an inner voice saying: ‘Stand up for justice, stand up for truth; and God will be at your side forever.’ Almost at once my fears began to go. My uncertainty disappeared. I was ready to face anything.” (1) 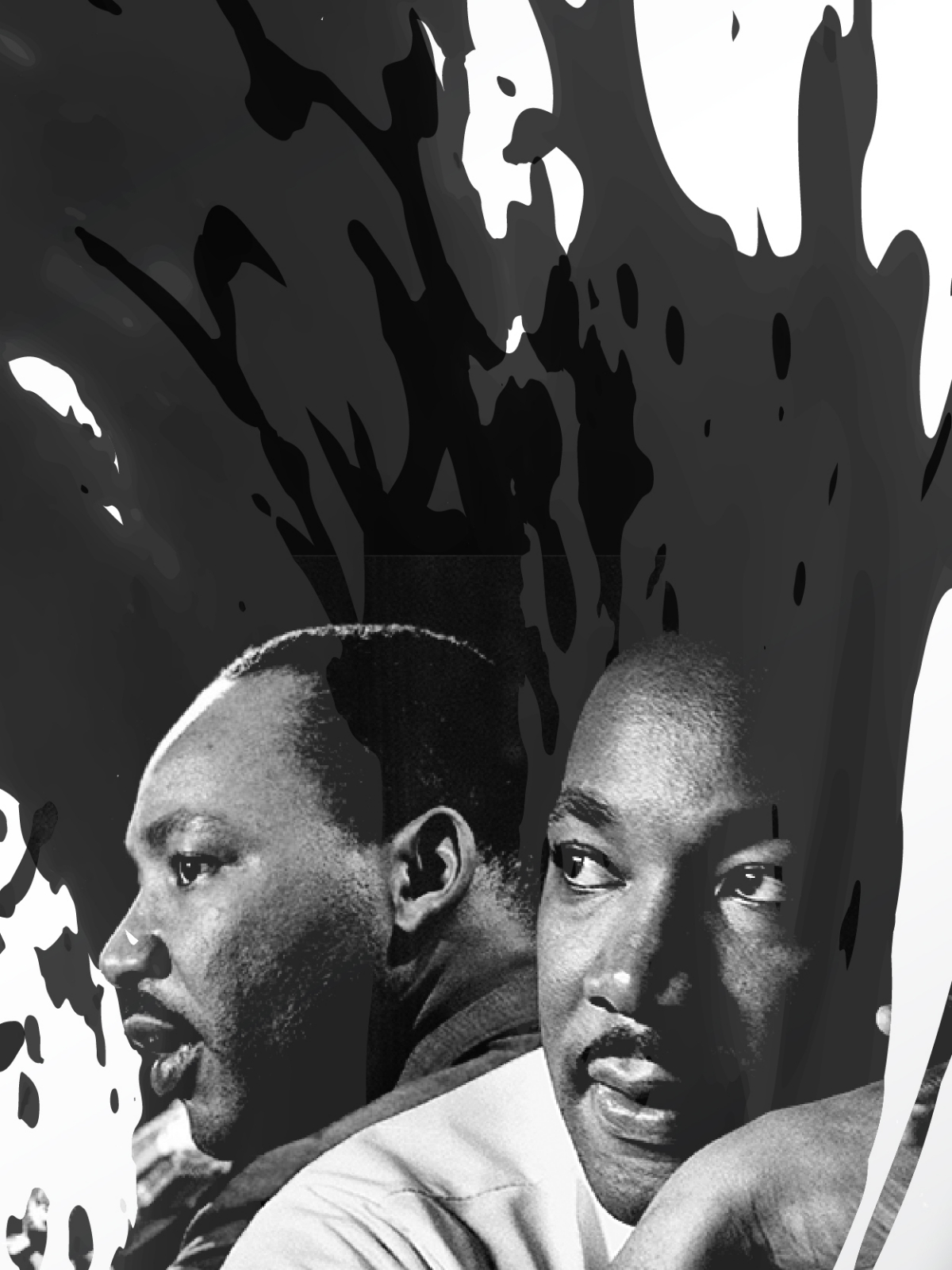 One thing we try to emphasize today with our students at King High School is that their lives matter.  We greet each one on the doorstep of adulthood and try to usher them into maturity, equipped for the one life they get to live.  What will that one life look like?  What will be the pillars of belief and conviction upon which their lives will stand?

If Dr. King were here, how would he answer that question?  If he spent time on this campus walking through our halls, listening to our conversations, and sitting down to eat lunch with us, what would he say defined his life?

It was just days after that moment at midnight there in his kitchen that a bomb with murderous intent exploded on the front porch of his home leaving a gaping hole and broken windows in its wake. While no one was hurt, everyone was angry. Police arrived and a barricade kept at bay a swirling crowd fixed on revenge.

King stepped out onto the porch and to the jangling discord, said:

“If you have weapons, take them home.  We are not advocating violence. Remember the words of Jesus, ‘He who lives by the sword will perish by the sword.’ No matter what they do to us, we must make them know that we love them. Jesus’ words echo across the centuries, ‘love your enemies, bless them that curse you, pray for them that spitefully use you.’  This is what we must live by. We must meet hate with love.” (2)

Today in South Africa, they are familiar with a Bantu word.  That word is Ubuntu. It comes from a saying that essentially says, “A person is a person through other persons.” Ubuntu declares that we are interconnected, designed for community.  The great South African leader, Nelson Mandela spoke of Ubuntu and practiced it.  Mandela described it this way: Ubuntu does not mean people should not address themselves, but the bigger question is this: Are you going to live in such a way that enables the community around you to improve? (3)

In 1956, when the Montgomery Bus Boycott had been successfully completed, King spoke of what he called a Beloved Community and it has hints of Ubuntu.

To the day of his last sermon, delivered just five days before his death, he preached that same message. “One day we will have to stand before the God of history and we will talk in terms of things we’ve done” he said in late March, 1968. But despite the great achievements of technologies and architecture, King warned: “It seems that I can hear the God of history saying, ‘That’s not enough!’ … it is what you’ve done to the least of my brethren, (that) you’ve done it as unto me.” (5)

What if King walked these halls, listened to our conversations, and sat to eat with us?  What if he were alive and here today?  We might ask him many things about his views on civil rights, but really, I think he’d ask us just one question:

How well are you doing at loving one another?

You see, King had just one life, as we all do.  He was flawed, but he lived his life well. It was stamped with  purpose, even if it took an encounter with God at his kitchen table to bring him to it.  But say what you will about that one life, his life really came down to one thing … love. From the Rock of Love flowed the rivers of justice, equality and reconciliation. The light of love, King argued, would dispel the dark shadows of hatred.

It’s been almost 20 years since King High first opened its doors and anniversaries have a way of causing reflection.  We must ask, how well are we living our one life, both as members of the King High School community and as Americans?

Are we loving the camouflaged kid as much as we are the AP scholar with a 4.0?  Do the down and outers get loved as much as the up and comers?  Do we love those to the Left of us and to the Right?

Do we hear the echoes of Dr. King as we walk these halls?  He’s calling us!  Love each other! Love even your enemies.  Sacrifice for others. Live in community, seek ways to improve the community around you.

51 years ago this April, Martin Luther King’s life tragically ended early, his Beloved Community not yet realized.  A half century later, there is still much to be done both here, and in the country he loved.  But while Ubuntu, American style, may still be a way off, and while there’s still a mountain to climb, this fact should not deter us from striving on toward that promised land.

So swing wide the doors. Gaze at the image of King.  Hear his call to live your life in service and love toward those with whom we are inextricably bound together.

And if we fearlessly fix our eyes on that goal, resolved and focused on that future day, then maybe … just maybe … when that day comes and we imagine Dr. King walking these halls, listening to our conversations and sitting down to eat lunch with us, perhaps we’ll hear him say: Well done.