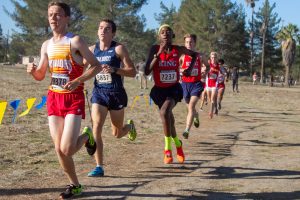 The last time the King boys varsity raced on the Riverside City Course was at the CIF Prelims in November of 2017.  It was a young and fresh squad that morning, a team that featured three freshmen and two sophomores.  Though the team did not advance to CIF Finals, it was clear by their tenacity and talent that good things were coming their way.

Enter 2018.  Back on the same course, this time for the increasingly competitive third-annual Riverside Invitational, that team with most of the same runners on the line showed that the “good things” have arrived.  The team was led by Garrett Vasta and Mitchel Machuca who both finished in the top 12 places.  The team time of 78:06 (combined total time of the top five finishers) was a full 2:39 ahead of where they were 11 months ago, with all five harriers averaging 5:12 per mile for the three mile course. A scant 24 seconds separated the first to the fifth scorer.  King’s sixth runner, freshman Gray Mavhera, crossed the line in 15:53 and set the 3-mile school record for freshmen.  The boys won by three points over Woodbridge of Irvine and notched their first full-team invitational win of the season.  In a few short weeks, they’ll return to the same course for the 2018 CIF Prelims, with the intent this time to move through the round and into CIF Finals. 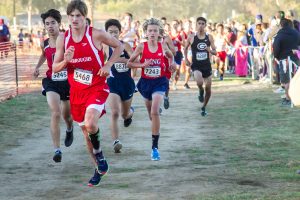 With his flowing blond hair that acts a bit like a superman cape, all Brendan Provance needed on Saturday was a mustache and he could have passed as a younger version of the famous Steve Prefontaine of Oregon and USA track and field fame from the 1970’s.  He raced like the legend on Saturday as well, finishing 17th in the boys sophomore race with a whopping 1:03 improvement from last year.  Malachi Cabanilla won that race, scampering to the lead early on and holding off a tenacious pursuer from Dana Hills the entire way.  In the boys’ JV race, senior Jefrey Ortiz, like Provance, had a great race, dropping 1:34 off of his 2017 time on the course.

The girls varsity finished 8th, behind the tenacious racing of Joanie Green who dropped 30 seconds off of her time from a year ago.  Amanda Sosa was close behind her along with newcomers Joselyn Stevenson and Briana Rodriguez who, while fresh faces to King XC, are making the team competitive with their great racing.   But it was the race of another freshman, Audrey Brunken, that really sparkled in the group.  In just her third varsity race, Audrey ran a very good 19:32 which is the 6th fastest time of any freshman in school history.

Shelby Grossi led the frosh-soph girls to a third place showing.  She improved 2:21 from a year ago and with the help of Justine 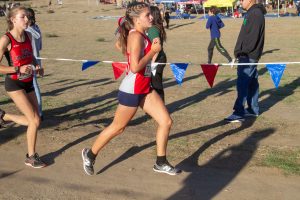 In a sport that is measurable by both time and distance, objective improvement is a wonderful measuring stick from year to year, team to team.  On a course that’s as much familiar as it is proximate, the King kids are improved, greatly improved from a year ago.

And that makes for good times.  Throw in a team win like the boys had and it’s a pretty sweet day.