CORONA:  Tuesday was the last BIG VIII league game and a league Championship was on the line for the Lady Wolves and 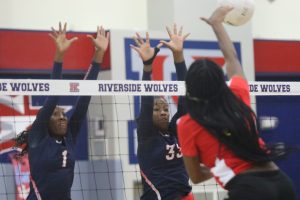 Santiago.  As a result,  the atmosphere was buzzing, the stands were packed and both team came ready to compete.

The Lady Wolves came out strong and forced Santiago to call a time-out at 14-8. Santiago fought back but the Lady wolves held on to the lead 24-20. Santiago went on a run after a missed serve with an ace, a block and a kill to tie it at 24. The Lady Wolves were not about to go down without a fight and took the lead 25-24 but Santiago played steady and finished with the 27-25 victory.

In Set 2 Santiago came out with a fury and momentum on their side to take a commanding 16-7 lead. King fought back and closed the gap to 18-14 but the slow start was to much to overcome as the Lady Wolves lost set 2 16-25.

King Volleyball has a lot of pride and it really showed in set 3 as the Lady Wolves fought back and forth as the match was on the line. The Lady Wolves played their best defense of the night with 20 digs in set 3. The disciplined defense and steady offensive play earned the Lady Wolves a 20-17 lead.

The tide would turn against King as some strong serving and transition attacking by Santiago forced King into some defensive errors. The Lady Wolves scratched and clawed their way to a 22-22 tie but Santiago finished strong with a 25-22 victory.

“I am very proud of the way we compete with class and character. Our team has a lot to be proud of on the season. I feel for our seniors because I know they wanted to end their high school careers as league champs but tonight was just​ not our night.” shared Coach Duncan.  “I also want to thank the parents, students, teachers and fans on their support throughout this season.”

The future is very bright for the Lady Wolves as Coach Marcella Brison and the JV team were perfect on their season and went undefeated and are league champs!

King Alum and CIF Champion Coach Melanie Hughes and The Freshmen team also won 2-0 and also claimed a league title. Congratulations to all the players and coaches on a great season.

CIF play seeding will be released Saturday at 1:00 pm. The 1st round of playoffs will start October 18th and Lady Wolves have qualified to play in that round!

Check out the CIF website for time and place for the 1st round match.