PASADENA: In the shadow of the Rose Bowl on a damp, cool morning, Brookside Golf Course host the SCGA State Qualifier for boys golf. The top 124 players from San Diego to Yosemite battled for the final few spots to state. 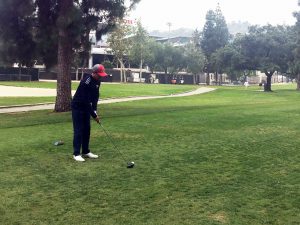 Due to the tournament being a shotgun start Johnny Walker began his round on the par 5 hole 11. Little did he know it wouldn’t be the only time he played the hole. Similar to the last two rounds of CIF where he took 2nd in Regionals and 6th at Finals this one would also be a round of minimal mistakes.

Walker began the round by putting up 8 straight pars. This put him back at hole 1 playing his 9th hole of the day. He finally was able to break the streak with an uphill 10 foot birdie putt. This seemed like the momentum he would need.

The next two holes however resulted in missed par putts and his score slipped back to 1 over par. With seven holes remaining Walker had to go aggressive.

While it is difficult to know what score will advance to State, the thought was 1 under par was at least the goal. Knowing he needed a birdie he played aggressively down the stretch. This led to birdie putts at holes 5,6,8,9 and 10.

The putt on the par 3 8th seemed to go in and inexplicably slid past. On 9, a hole guarded by an enormous tree, he hit an amazing approach, around the tree, that rested only 8 feet from the hole. Somehow that too burned the edge of the cup as it slid by. With the initial target of one under par it seemed as if the fairy tale season was over.

As the scores began to roll in however the numbers on the leader board inched higher. When it was over one over par actually put 7 guys into a playoff for the 8th and 9th final spots to state.

Johnny’s first playoff hole was actually the 10th hole, where 45 minutes earlier a birdie putt miss ended his round. After a 310 yard drive and and approach to 20 plus feet, Johnny was the second closest of 7. After one player shockingly chipped in, Johnny was left with a near exact same putt from the last time he played the hole. He knew the line and buried it into the back of the cup.

The putt instantly eliminated 4 of the 7 competitors and the only thing left was a 15 foot putt from Thomas Stephenson of Carlsbad. Somehow under the pressure he was able to make his birdie putt as well.

“It was a little deflating coach Kyle LeDuc” said. “It seemed when he made the putt we were through to State.”

Hole 11 was the second playoff hole and also the hole that started the day. It didn’t go nearly as well. After an unfortunate tee shot, and some difficult recovery shots he was left with a four foot putt to continue the playoff. In what seemed like the 10th near miss of the day it just wasn’t meant to be.

Walker would be the last man out and the first alternate to state.

When all said in done it was a heartbreaking finish to a record breaking year. As a freshman Johnny took the high school scene by storm.

He’s The Press Enterprise favorite for Player of the Year, he won the Riverside Cup, Poly Tournament, Paloma Valley tournament and Big 8 league. He also was the top area finisher at CIF back to back weeks and the top Inland Empire finisher at the qualifier. Walker  set the freshman and season scoring averages for King High School this season.

Though it may not have ended with a State finish, it was still a remarkable and amazing year. With a young team the future looks incredibly bright for King golf.