SANTA BARBARA:  Johnny Walker is a 9th grader but the way he plays golf, you’d never know it.

The kid is good.  Really good. 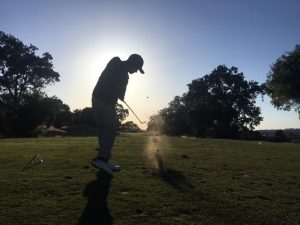 After winning a number of in-season tournaments and the Big 8 Individual League Champion, the 15 year-old advanced on Thursday to play in the CIF Southern Section Championships.  He was one of the top 60 players from CIF selected to play at the Rancho San Marcos Golf Course with the hopes of finishing in the top 28.  Those select golfers would then be on to the SCGA Southern California State Qualifier tournament next week. .

“Golf’s different than most sports” head coach Kevin LeDuc said.  “On any given day, practically any one of those 60 could win.  It just depends on how you play on that day.”

Walker’s starting hole was on hole 12 on top of a plateau. After parring the first hole, he birdied the second hole by draining a 20 footer from the fringe.

“Sometimes a boring round in terms of excitement is a good round.  There were little mistakes, and little highlights, but the key for the day was to just advance to another round.” Le Duc said.  This marks Walker’s 3rd straight round in CIF that has been at or below par. The even-par 74 on Monday at Los Serranos proved to be not enough as King’s team squad finished in 11th place.

Walker finished in 6th place, 3 strokes off the leaders. He is one of only 4 freshman to head off to SCGA state qualifying. SCGA Southern qualifier for state is the top 28 players from CIF-SS top 12 from San Diego section, 12 from LA City and 12 from Central Section of CIF.  From that tournament, the top 3 teams and top 9 individuals go on to State. So  ultimately, 27 players of the 124 man field will move on.

Coach LeDuc said, “In CIF so  much can go wrong real quick. Sometimes one hole prevents you from moving on. So to advance to state it is really about play consistent smart golf. So far Johnny has really been able to do that, considering he has 4 bogies in 36 holes.”

Next week will be played at Brookside Golf Course in Pasadena in the shadow of the Rose Bowl.

Walker becomes only the third Wolf player in school history to take part in the prestigious event.

Which makes him pretty good.  Even if he’s only a freshman.