RIVERSIDE:  The swim team does not have to travel very far to compete in the CIF Southern Section Finals, as the meet has been held at the Riverside Community College pool complex ever since RCC upgraded their facility to a state-of-the-art multi million dollar swim and dive center. 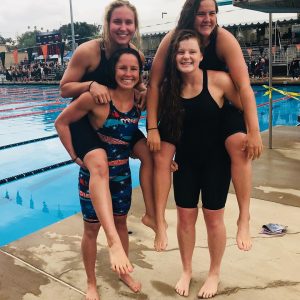 But proximity doesn’t always amount to performance as King got out poorly on Friday’s preliminary events.

Head Coach Leisha Clendenen said, “We came out a little flat on Friday and that could have been because of the weather (it was overcast and cool) or just having the meet in our backyard or just getting the nerves out. However all the swimmers made it back to Finals and we built on our diver’s momentum the rest of the meet.”

But things turned on Saturday during the Finals, and King ultimately punched the tickets to the State meet for three athletes, Zac Thelwell, Ben Wolf and Lauren Vitort. 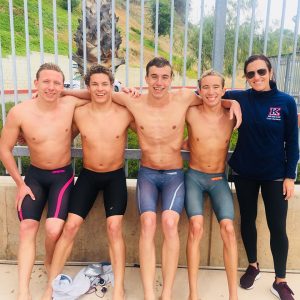 permission to advance to State.   The boys relays – Thelwell, Wolf, Matt Howard and Blake Dennis reset their school records in the 200 free relay and 400 free relay, finishing with 1:27.09 and 3:11.39 respectively.

“I’m really proud of how our team came together and finished the season” Howard said.  “It was an historic ending to an historic season”.

The girls relays of Lauren Vitort, Leah Thomas, Madi Stamen and Quincy Cechini all had state consideration times at Finals as well, and like the boys, await word from the State office.  Cecnini raced her best times in the 200 IM and the 100 back, which, like the relay earned her State consideration. 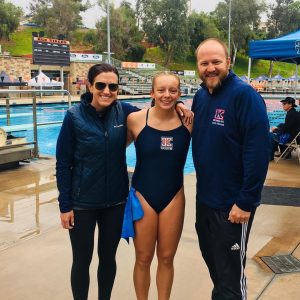 In Diving, Mandy Baird qualified for the State meet with a third-place finish.

“I really can’t be more happy with how this season has progressed. ” Clendenen said.  “All of our swimmers – at all levels- set high expectations and made huge improvements. They have developed into a team that is really supportive of one another and fun but also really focused on reaching our goals.”

Granted, getting to the State Meet – held in Fresno next weekend – is a bit more of a task than it is to get to the pool deck at RCC.  But it’s worth it.

“The State meet creates an atmosphere that is unmatched.” Clendenen said.  “I am excited to bring a new group of kids up to Fresno this year. I want this to be an expectation for the team and I think it’s important for our program and school to go up and compete. This has been in the plan all season so we plan to go in prepared to do well, compete and feel inspired to do the same again next year.”