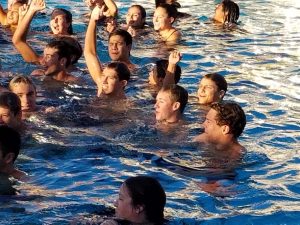 CORONA:  Whatever anxiety or nerves King’s boys felt in their three-way tie for the league championship heading into the Finals, came undone on Thursday as they won, but stay tied.

Yes, it’s a bit complicated. King boys swim team ended up knotted but untied and free at the top of the Big 8 League on Thursday after an incredible finish at the League Finals.  When the water settled, three teams remained even in the first place of the league, but each team, one presumes, will celebrate in the freedom that first place creates, even if its shared equally by two other schools.  It’s the first league title for King’s boys since 2003.

“This is the type of season that proves you have to show up for your team each day and fight for every finish. Had we not tied in those dual meets – still an incredible feat to 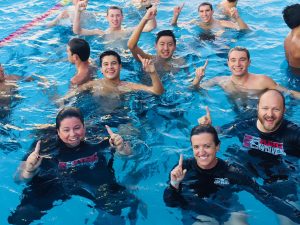 happen twice in a season- and made huge improvements today, we would not be sharing in this League Championship” said head coach Leisha Clendenen.  (Read the Press Enterprise’s story on the meet here. It’s full of great photos by Terry Pierson of league and King swimmers)

Centennial was the defending League champ with several CIF and state qualifiers and their coach reported that his team “swam out of their minds” on Thursday.

But, “we beat them today by swimming for the team and thus walking away with best times and beating Centennial.” Clendenen said. 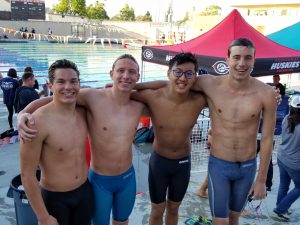 “I think it also shows how strong this League is” she continued.  “With the times from our league finals our teams will have a strong representation next week at CIF. We talked about creating a legacy for our boys program and to do all the little things right. We made some mistakes earlier this season, but we practiced really hard, with a lot of double day workouts and I think it showed with today’s finishes. ”

In addition to the top finishes, the meet saw several time drops resulting in CIF consideration and automatic times standards. Jason Howard moved from an eighth place seed to a second place finish in the 100 breaststroke and a CIF time in the process. Teammate Juan Ladinez improved over six seconds from throughout the season to also earn himself a trip to CIF in the same event. Samuel Xu challenged himself in the 200 IM and 500 freestyle and with 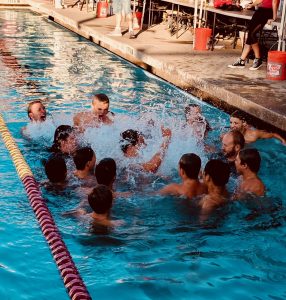 his drops will swim at CIF in those events. 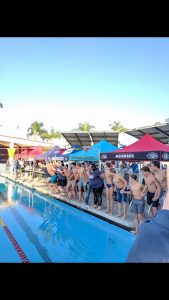 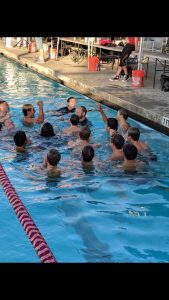 Ben Wolf set a team record and an Big 8 League record in the 200 freestyle and 100 fly events. In the boys 200 and 400 free relays, the squads set school records as well as CIF Automatic and State standards.

Freshmen Will Tibbetts, Ben Garcia, Aden Peralta and Raphael Madarang-all made it back in each event and swam to huge time drops and improved places.