League Finals for Boys Golf concluded over two wet days. On Monday at Canyon Crest Country Club the top 36 players from the Big 8 league faced off, with the top 16 advancing to the second day at Victoria Country Club.

The Wolves had 5 players advance to Wednesday’s second round. Terrific showings put Evan Chavez back to back 84’s and Ethan Elrod’s 85,83 into a tie for 9th place in league. Though only the top 8 are crowned all league, both finished just a stroke out.

Johnny Walker concluded a remarkable regular season with a come from behind victory to capture King’s 3rd straight individual league champion. Having already won all 3 tournaments he has been in this year(Riverside Cup, Poly Classic, and Paloma Valley Tournament) it would take all 36 holes to win at league finals. Coming into day 2 Walker trailed second place finisher Matthew Huo by 2 strokes. Prior to the round the strategy was to try to remain close, and play safely the first 13 holes, and use length and aggressiveness the final 5 holes to stage a comeback. Things started to unravel a little early

for Walker though as holes 9-12 all resulted in bogies. After a short miss on 14 Walker remained 3 strokes back of Huo.

Trying to complete the tournament perfection though, Walker played the final 4 holes 2 under. This was highlighted by a wild hole 18 which required Walker to hit a remarkable shot on it to win The tee shot ended up next to a tree and he was forced to hit his second shot while sitting on the tree. Once on the green Walker was left with a 10 footer up the hill to capture the league championship.

“I thought it was left edge, and I put it right there,” Walker said about the final putt.

The win follows up Sam Butler winning the past two years for King as well at league finals. Walker will now move on to Individual CIF on Monday also at Victoria. He will look to capture his 3rd tournament at the course in this season alone. 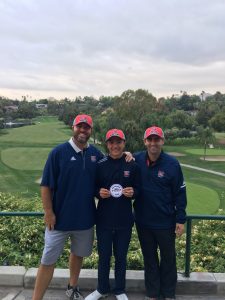