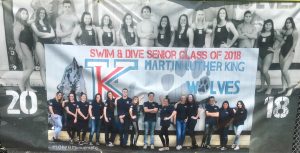 Five meets in seven days did not deter the swimming and diving team from moving in to its final home meet of the season with enthusiasm, taking down Corona High School 132-38 for the girls and 111-55 for the boys.

Swimming in some of their off events throughout the meet, the girls swept all events except for a second and third place finish in the 50 and 100 freestyles. The boys were equally as impressive with their drive to win and keep the course

The teams celebrated its seniors throughout the meet, with the King graduates winning the girls 200 medley, 200 free and 400 free relays. Seniors Lauren Vitort, Madison Stamen, and Leah Thomas all came away victorious in not only their relays but their individual campaigns, while senior Kameryn Pfeifer, Kyndal Burrell, and Hannah Falls-Hand swam to best times in their off events. On the boys side, seniors Zac Thelwell and Blake Dennis helped their team secure another win in its quest to bring home the Wolves first League title since joining the Big VIII. Both girls and boys squads won each event on the day, securing CIF times along the way.

Prior to entering the Corona dual, the Wolves took on Redlands East Valley, taking both JV levels and boys varsity, but handing the girls squad its first loss of the season. The team’s depth could not handle the CIF runner-ups top swimmers, remaining close throughout the meet, before the Wildcats took the top spot in the five of the last six events.

Last Friday and Saturday, the Wolves took to Walnut, CA for the prestigious Mt. Sac Swim Meet of Champions, getting a preview of the competition for their League Finals and CIF championships. Senior Lauren Vitort swam to second place finishes in her 200 and 500 freestyles, nearly besting the previous meet records. Leah Thomas also set a CIF automatic time in the 200 free with a 1:56.06. Abigail Nguyen, Amber Harris, Valerie Juarez, Kameryn Pfeifer and Quincy Cechini all made it back in individual events and swam to season best times.

For the boys, the Howard twins continue to prove why consistency in practice is crucial and are paying off huge dividends in all events they take to. Matt Howard, typically a sprinter, decided to challenge himself in the 500 freestyle, swimming with the top boys in the division and dropping his time by close to 20 seconds from last season. Brother Jason continues to drop every time he takes to the pool, making huge improvements in both his 100 butterfly and breaststroke events. After a solid week of training over Spring Break, Jaeden Karger, Jacob Goldsberry, and Matt Hamburger made even more progress in their top events with times that will allow for even more points for the Big VIII League Championships.

Before the week of competition took off, the team defeated Roosevelt 124 -46 and 89-81 for the girls and boys, respectively. Swimming in off events for the day, the boys were able to hold off the Mustangs for its eight point victory. Junior Ben Wolf, capitalized on his junior year campaign by setting another school record in the 200 freestyle, taking his total this season to three individual events and one relay. The team once again capitalized on the back half of the meet lineup, taking first and second in the backstroke and sweeping the breast stroke events before winning the 400 freestyle relay.

The boys squad needs a victory this next Tuesday against Centennial to secure at least a share of the Big VIII league title. Both squads are currently undefeated in league matchups.