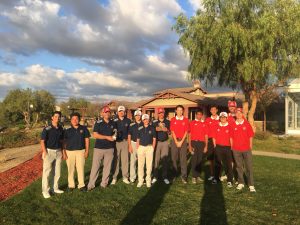 The boys golf team were at The Links at Summerly for the Wildcat invitational hosted by Paloma Valley on Saturday.  The team was able to shoot a 404 and finish 3rd among 12 teams at the event.

“Overall it was a good performance” said Coach LeDuc. The Wolves put two teams into the tournament and the JV team was also able to defeat 4 of the other varsity programs.

“The third place finish was our best tournament performance thus far this year on a course most of the players had never played.” LeDuc said.

The highlight was Johnny Walker completing the tri-fecta of tournaments this season by winning his 3rd high school tournament in as many tries. He was 2 over with 4 holes remaining and birdied 3 of the final 4 to win by one stroke with a 1 under 70.

“After a very busy 4 weeks it was a fun tournament to be able to sort of relax and just have a fun round, and see how we had improved” LeDuc said.  “We have had a tough 3 match stretch ahead.  The players really put it on themselves to have a good team score today. Some match highlights were Ivan Ciudad Real’s 80 and Chase Colunga’s 81.

“Their control” LeDuc commented, “really helped them play well on a course that can cause a lot of problems.”