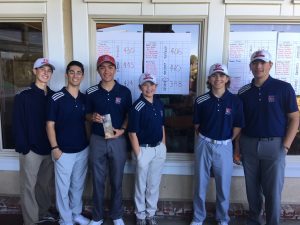 The Thomas Homer Classic hosted by Riverside Poly high school at Victoria is one of the longest running high school golf tournaments in California. The Wolves played a fabulous tournament and really made significant progress in their play. The Wolves finished 5th of 13 teams, but the quality of the field really puts that in perspective. Two of the 6 teams that participated in state golf last year were in the field. Including the CIFSS Champion and San Diego Champion. King shot a season low 398 and were able to defeat some significant local rivals including Santiago, Great Oak, and tournament host Riverside Poly.  In general the team played terrific including 4 players putting up their best 18 hole score for King.

The team was once again led to Johnny Walker. His 68 won the event and was one off the tournament record. To put that in perspective he beat scores by former tournament winners and PGA players, Aaron Wise, Craig Stadler and Pat Perez. He was also able to defeat 3 of the top 20 juniors in California including recent PGA tour participant Charlie Reiter. “I just was hitting my shots the way I wanted to and everything came together during the round.” Walker had to say.

The 68 also tied a King High School record set 13 years ago by former player Mike Drake over 18 holes. Walker has taken the high school season by storm, playing against some top level competition and bringing home two tournaments in under a week. Not knowing what score would be the winning number he played aggressive down the stretch birding 3 of the final 9 holes in route to a victory.

The rest of the Wolves didn’t go unnoticed. Junior Joel Gonsier flashed a lot of the talent that has made him a 3 year letter winner by posting his best 18 for the wolves. His 75 was really the difference maker for the wolves placing as high as they did. His short game was spectacular and really reflected the work that he had been putting in. Other notables were AJ Burke and Evan Chavez who shot 83 and 86 respectively. Their scores were career bests for the wolves as well. Overall it was an incredible successful day and shows how far the team is coming. It was a great team effort and everyone their played better than expected.