In a rivalry unmatched by no one, the Poly Bears and King Wolves teed off in what can only be described as a near blizzard. As the temperature dropped into the low 40’s and the wind howled at gusts over 20 mph the Wolves were able to pull away with a 209-234 victory over the Bears.

Led once again by Johnny Walker shooting a 2 under par 34 the Wolves were able to pull away from the Bears.

Hole 7 was really a turning point where the Wolves had 3 birdies and played the hole as a group at 2 under par.  Poly struggled on the hole and it was a 10 stroke swing for the match. Walker culminated his round with a chip in on the 9th to record a bogey free round. His 34 tied for 4th in King History for a 9 hole match. 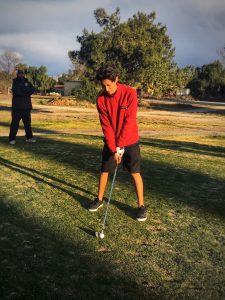 Other contributors were Caesar Ledesma, a senior, who played his first varsity match and shot a 44 which was tied for the 3rd best score on the team;  fairly impressive considering he chose to go with the shorts on a day that seemed to demand a more bundled wardrobe.

Joel Gonsier found himself 6 over par after 4 holes, but managed to maintain that 6 over for the remainder of the match.

King moves to 1-0 on the season with the win.  “It is always great to beat Poly” said Coach LeDuc. “It is in a small way the official championship of Riverside High School golf and the champion seems to flip each year. It was good to start the season off with a win against such a traditional powerhouse. Hopefully we can use this momentum to build from.”