“It was a solid start to the season. The greens were incredibly fast and the course played very difficult. Despite the fact the weather was great the greens were the equalizer as some of the top players in Southern California struggled. In a long season it was a good first test for us” said head Coach Kevin LeDuc.

“It would have been easy to throw in the towel and play and hope the team didn’t need their score” LeDuc said after the tournament.

Chase Colunga and Joel Gonsier both shot 85; Chase was in his first varsity tournament for the team. After a rough start that left him 7 over through 3 holes he was able to play 6 over through the final 16 in a true test of will. 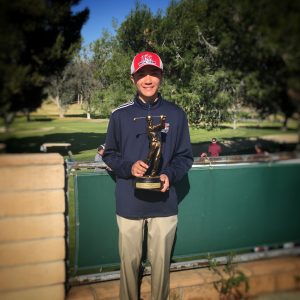 The highlight for the day was the phenom, Johnny Walker making his long awaited high school debut. He did not disappoint and despite a rough go turned it up on the back 9. Two-over through the first 12 holes he played aggressive down the stretch to play the final 6 holes 3 under par.

This included a 4 foot putt on the final hole that would give him the tournament championship over Cal Poly commit Cade Casaga on a card-off.

“It was a great debut and an entire team effort. After a practice round last Thursday that could only be described as a disaster, the entire team really battled to put up a respectable first day total” said LeDuc.