SAN FRANCISCO:  The plan since last May had been to travel to Monterey’s “Early Bird Invitational” but brush fires in the last two weeks precipitated the host school canceling the meet and leaving King searching for a “back up plan”.

Fortunately for the 52 athletes scheduled to make the trip, the Lowell Invitational in San Francisco’s Golden Gate Park was slated for the same day and a quick request to get a late add was granted.  Plan B was set in motion and King extended their trip 120 miles further north to compete in the meet for the third time in the last decade.

The Lowell Invitational certainly doesn’t meet the criteria of any so-called Plan B or “back up”. One could argue that the course, weather and grandeur of the Golden Gate Park in San Francisco is one of the best settings in all the state for a cross country invitational. The 44th running of the invitational here is 2016 was no exception. 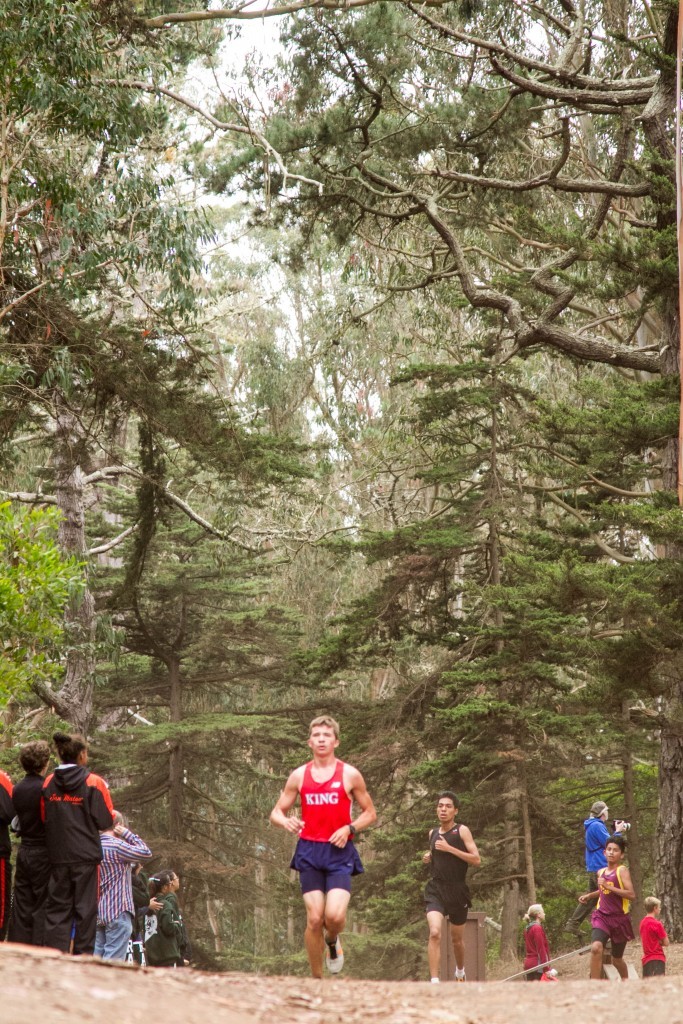 to that environment King brought their A game and after 6 divisional races in which the King Wolves competed well, a number of the members of the King High contingent were fielding the question from spectators and athletes alike: “where is King from?”

The freshmen boys were the first off the line, racing over a 2.1 mile distance. Austin Fortenberry led for King with an 18th place finish and a medal awarded for his effort. Tommy Lu was second for the Wolves.  The team of precocious 9th graders, finished 8th out of 20 teams in the race. Hector Ruvalcaba and Aiden Garcia were next while Mitchel Machuca and Luis Kekula were the final scorers. Jenna Bernath, Mackenzie Peters and Ashley Haring were among the leaders of the girls’ frosh-soph race and the three ran in the top 20 places of the field throughout the race and finished 17-18-23 respectively; all with very nice races. Lydia Xu, and Sydney Grossi  rounded out the scoring to take the team to 7th place of 24 teams. These young ladies gained great experience as they learn the sport of cross country.

Roman Hernandez, Daniel Lopez and Dathan Chann asserted themselves in the sophomore race right from the gun and as a result they pulled their teammates to a commanding victory that saw a margin over second place of 41 points. Hernandez was 4th overall, Lopez was right on his heels in 5th and Chann crossed in 9th. Joseph Landeros and Matthew Castro were the final two scorers but their low points (22, 24) made the team victory a visible reality that spawned the aforementioned questions from spectators … “where are you from?”

Once the freshmen and sophomore races were complete, the course was changed to its 2.93 mile version and the varsity and JV races were on. The A-game of King kept rolling with a tremendous team win in the girls’ varsity contest.  Lauren Peurifoy, who is perhaps the most improved runner in the state, showed her Northern Cal neighbors what So-Cal was introduced to last week in the Cool Breeze invitational.

Midway through the race she went past the pre-meet favorite Niki Iyer from Harker High – a young lady who was third in the State 3200 meter track final last June — and scampered away to win by 21 seconds in 17:08, the second fastest time ever recorded on the course. Equally impressive was the racing going on behind her. Rebekah Pendleton finished 4th and showed she means business in this, her senior season. Fellow senior Kathryn Hammar who spent most of 2015 working out of an injury, put down another great race to cross the line in 7th. Allison Janes was next and was followed by sophomore Amanda Sosa to finish the scoring group and by 22 points over St. Francis. 22 teams scored, and Joelle Ramos and Skye Smith at 6-7 for the Wolves were faster than the 6-7 finishers of all but one of those teams. Great depth on display!

King’s boys are new to the varsity level this season as the 2015 squad was made up entirely of seniors. So this group who is getting a bit of “baptism by fire” in 2016 is having to figure out how to compete at a higher level than they did in the past. Plan A is to dive right in and that’s what they did. With last week’s top runner, Andrew Simpson not racing due to injury, the group stepped up nicely with Mario Machuca leading in 10th place, looking very strong in the process. He was followed by Chris Barba and Austin Dai who have been training well for this moment and it would appear they are capitalizing off that faithful preparation. Jonathan Moncada had a very nice race to finish as King’s number-four while sophomore Garrett Vasta nailed a terrific second half of the race, moving up nicely to finish just steps behind Moncada. Newcomer to the sport, Cameron Boydd was 50th in a field of 2016. These “rookie” varsity runners again showed tremendous poise on a big stage and finished second behind Palo Alto. In the JV races, Carolina Avalos was the first for King to cross the line in the girls’ race, junior Chloe Morris was all smiles after her very gratifying personal performance. Fellow juniors Karissa Bardin, Carissa Avila and Alexandria Cobb all had solid performance. Brandon Villacres and Connor Sharp were the only two King runners in the boys JV race and both had really good races.

Following the team celebration over such fine performances, the 52 kids from King got to see and pose for pictures at the famed Golden Gate Bridge and enjoy dinner, the sights and shopping at Peir 39 which was humming with like-minded tourists.

If you have to fall back to Plan B, San Francisco surely isn’t a bad option. Making it even better is when the teams can bring their A Game to the venue, leaving many wondering, “Where are you from?”