PASADENA: King kicked off their season at the “Cool Breeze Invitational” hosted by Claremont High School on the beautiful golf course next to Pasadena’s Rose Bowl.  It was the first time for the Wolves, attracted to the meet that hosted 66 schools by its late afternoon start and a conclusion under lights for races in the cool breezes of the Pacific.  The setting and weather produced a record setting run for the girls varsity and good early-season marks for the entire team.

Sophomore Lauren Peurifoy who has been training faithfully all summer and with great motivation, showed what a solid summer of work can do as she catapulted herself to a 4th place finish in the fastest varsity race of the day but also to the top of King’s record books.  Her time of 16:59 over three miles crushed the old school record at 3 miles of 17:17 set back in 2010 and is over two minutes faster than Lauren’s best mark of 2015!  Lauren’s scorching run set the table for her teammates to follow and collectively, the top five scorers of Peurifoy, Rebekah Pendleton, Kela Mahvera, Kathryn Hammar and Allison Janes ran a school record team time (cumulative times of the first five finishers for the team) at 91:25.  The girls finished 5th out of 25 teams.  Pendleton’s 18:08 was number-4 all time on the senior list, Mahvera’s 18:30 set a King record for freshmen all time.  Indeed, it was a record-setting run for the ladies! 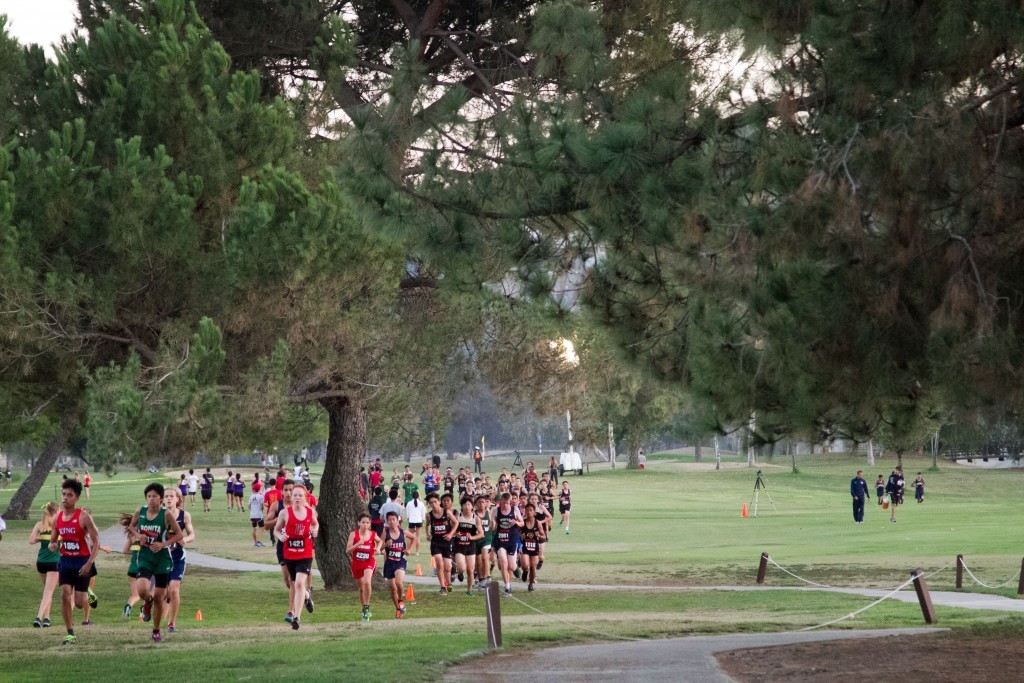 The varsity boys are a “new team” for the current campaign as the 2015 squad was made up entirely of seniors which puts this current varsity group in the unenviable position of having no experience at the varsity level.  But with the new season comes a new responsibility, opportunity and a chance to shine irregardless of the “back story.”  The program’s pursuit of excellence demands that each new team rise and this year’s team is no exception.

So, like the girls, this team was entered in the fastest race of the day and though very green to this setting, they handled themselves well under the lights and pressure of a big race. Led by Andrew Simpson, the team finished 11th of 29 teams and seemed to exhibit poise on this stage they have yet to get used to.  Mario Machuca and Chris Barba were the next across the line, followed by Austin Dai and Jonanthan Moncada to finish up the scoring.

King’s two teams – boys and girls – were spread across 8 total races.  The freshmen girls were led with nice debuts by Ashley Haring and Jenna Bernath.  For the boys’ Austin Fortenberry and Luke Freese were the top two freshmen for the Wolves.  At the JV level, Aman Rana had the 8th fastest King mark on the day to lead that group.  Dathan Chann and Roman Hernandez looked very strong and determined in the sophomore boys’ race, while Arianna Runyan started her rookie season in style with a 15th place finish in the sophomore girls race.

The first meet of the season got off to a good start. With records set by the ladies and strong, competitive efforts spread evenly across the lineups for King, the Cool Breeze Invitational may just prove to be the wind in the sails of the team as they head deeper into the seaon of 2016.